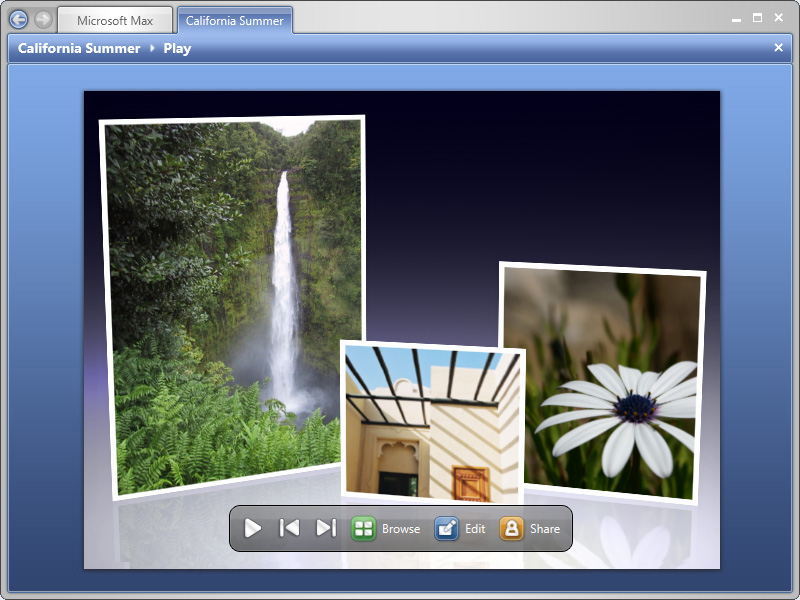 Well, it’s official at any rate. Contrary to what you’ve heard, Windows Vista will not be shipping with any of the original technologies, features, capabilities, or subsystems originally promised (and for those of you that really couldn’t tell: it’s called sarcasm!). First it was the real Aero – complete visual control over one’s system. Amazing graphics, sidebars that were a part of the Windows Core, Aero Diamond. Then it was NGSCB and its amazing security features – not DRM, but total privacy control; your privacy. Monad. Last we heard, it was WinFS, the king-pin feature that was promised to change the way you think of data… And now the last one is gone: Microsoft Max is dead.

Microsoft Max was a “virtual photo albums and distributing them online in a peer-to-peer fashion.” But it was more than just a sharing tool, it, in-keeping with the original Longhorn “tradition” provided a different way of looking at the data stored on your drive. Microsoft Max + WinFS would have been a formidable duo, but alas, it was not to be. For example, “3D Mantle View” (pictured above), treated albums as individual items. It provide a way to visually “stack” these and photos on top and around each other in ways that pertained to the way you actually used them – visualization of information movement.

But its biggest potential was the P2P functionality. No, it wasn’t KazAa, but it wasn’t meant to be. It’s not for sharing photos of your family vacation so much as it was for team collaboration, sharing of thoughts and ideas conveyed by means of a simple photo. Oh yeah, that reminds us – Vista’s previously well-developed PC-to-PC collaborative synchronization work protocol was also exorcised a couple of months ago. It seems Microsoft is dedicated to not shipping Vista with anything that might be deemed useful.

Again, just like when WinFS was officially killed, it’s not like we couldn’t see it coming. Microsoft Max hasn’t been touched in almost a year (March 6, 2006 to be exact), and Vista obviously hit Beta 2, RC1, and “RC2” without it – but that doesn’t make it OK though. Yesterday Microsoft came forward and announced a final and “no matter what” RTM date (not RTM build, but actual Release-to-Manufacturer) of November 30th, 2006. Yesterday Microsoft came forward and killed the last remaining member of the Longhorn information-control vision. Coincidence? Probably not.

It doesn’t matter why or how, and it doesn’t matter when the actual decision was made. What does matter is that Microsoft had a killer idea for a media-centric collaboration platform, and they killed it. But this is a bit different from WinFS & Co. Microsoft Max can be built as stand-alone application, and it doesn’t have to be Microsoft that does it. It was a great idea, and Microsoft had first “dibs” so to speak, but that doesn’t mean that the idea has to die along with it.