Although we came across {smartassembly} while searching for the best obfuscation tool, we’re most impressed in some of the amazing improvements to .NET assemblies in terms of optimization and performance in our test runs. Throughout this review, we’ve focused on getting a real-world look at things, and for this section, we just put our EasyBCD through the motions, and were duly impressed.

{smartassembly} has a couple of excellent features aimed at improving the memory usage of your .NET assemblies. There are a couple of options that can be enabled, but first, here’s a before-and-after: 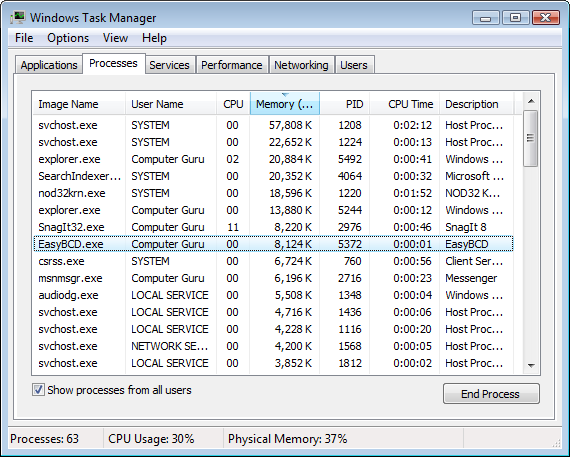 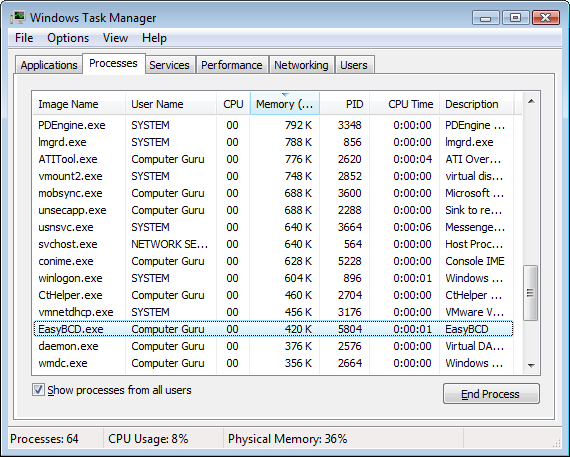 We asked the developers of {smartassembly} for some of the specifics, and they told us that by default the CLR reserves a ton of memory for .NET assemblies – whether or not they request it. So {smartassembly} intelligently detects when the CPU is idle (or thereabout) and increases or decreases the amount of reserved memory for your assembly according to its requirements – “automated” GC in a sense, except that memory may or may not have ever been in use.

In that same vein, {smartassembly} (with the benefit of literally having access to your source code thanks to the way .NET is designed) marks any and all classes that don’t have any detectable “child” classes inheriting from them as “sealed” thereby reducing the amount of memory and CPU used by the CLR during run-time to determine what functions should be made available to other classes and libraries.

One of the unique techniques used by {smartassembly} to improve the performance of .NET assemblies involves not loading all of the required dependencies

of the main application at once. This is similar to inline vs. external functions in C++, except the dependencies – once requested – are expanded into the memory-space and then have the same performance as the main application itself. Effectively, this is an intelligent compromise between performance and bloat, especially in large applications that rarely have all options activated at once. In our tests, it depends on the size (and quantity) of the external libraries and dependencies being used by the application in question, but by only loading the main assembly into the memory then dynamically decompressing the dependencies (packed with a mild compression algorithm) as one-time occurrence can end up with a huge performance benefit.

{smartassembly} also takes a heuristics approach with regards to detecting unused code and dependencies, then simply cutting them out of the compiled software. Depending on the exact make-up of your program, this has several improvements including securing as-of-yet unimplemented code from prying eyes (think of all those Easter Eggs!), decreasing the executable assembly’s file size, and improving memory usage.

{smartassembly} has one more feature that can make a real difference: it can merge all dependencies and libraries that your application relies on directly into your own code. Then when the time comes to apply the above-mentioned improvements, all those bulky libraries that you only use a function or two from are suddenly subjected to intense filtering and pruning. If you’re using some heavy UI libraries (like DevEx), this can be a real God-send. Besides the drastic improvements to the size of your application, this leads to snappier code and easier deployment – no need to muck around with dependencies in your package manager.