For the past week or so (what are a couple of 12-hour periods here or there between friends?) isoHunt has been “sick” when accessed from certain regions – but perfectly fine from others.

At the moment, users are being redirected to a tongue-in-cheek “isoHunt is Sick” page, letting them know that isoHunt’s hardware and software services wouldn’t mind a bit more attention and that, hopefully, isoHunt will be back up shortly.. 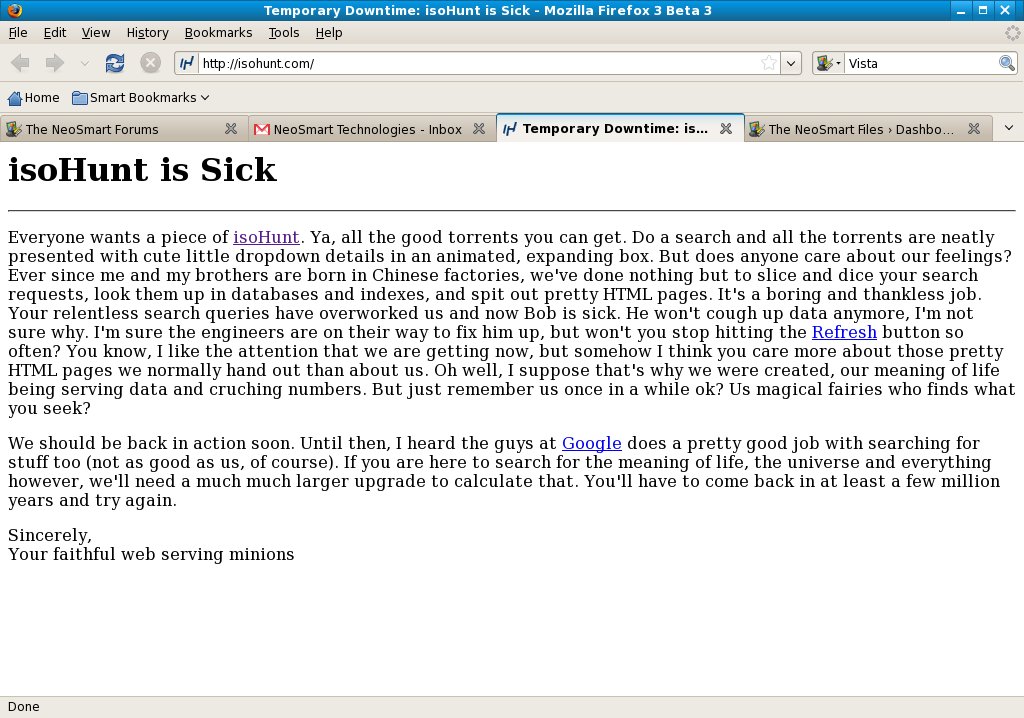 We’ve already informed the isoHunt team of the issue, and they’ve confirmed that they were not aware of this region-specific behavior until now, so you can put your conspiracy/censorship theories away for now. We don’t have a list of all the regions affected, but users in the Middle East have reported not being able to access the site. The isoHunt team has promised to look into the issue, and we’ll post updates when they’re available.

For isoHunt loyalists hell-bent on using the site but cannot, we recommend using this alternative URI for the time-being:

This is the coral-cached link, and fortunately access from the Coral servers is directed to the proper site and has full access. Yes, it’s a bit slow & slightly out-of-sync, but it should do until isoHunt is back up and fully-operational.

Update: 12:42 UTC
Our own internal analysis seems to indicate that isoHunt’s web servers are incorrectly bouncing requests from certain IP ranges to the temporary downtime page. We believe this may be an unintended side-effect of the major overhaul isoHunt underwent last week when they added commenting and voting to torrent listings on their site (which is very nicely implemented, by the way!); especially seeing as the timings between the downtime and the code overhaul are too close to be called a coincidence – at least not without evidence to the contrary.

Update
As of approximately 01:00 UTC access to isoHunt.com has been restored.