Richard Stallman: legendary founder of the Free Software Foundation, purveyor of the GPL, defender of open source. And – as of today – expert FUD manipulator. 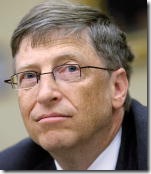 Obviously someone was seriously pissed off at the abundance of (largely positive) press coverage Bill Gates has been receiving as he stepped down from his final roles at Microsoft.. and it appears Mr. Stallman just couldn’t bear to let the man he hates more than any other step down without getting that last word in.

In an article by Richard Stallman published on BBC today, Stallman pulled back no punches bashing not only Bill Gates, Microsoft, and makers of proprietary software everywhere but also took the incredibly cheap shot of accusing the Bill & Melinda Gates Foundation of working to ruin the very countries they’re trying to help:

Gates’ philanthropy for health care for poor countries has won some people’s good opinion. The LA Times reported that his foundation spends five to 10% of its money annually and invests the rest, sometimes in companies it suggests cause environmental degradation and illness in the same poor countries.

Never mind the fact that those are unsubstantiated rumors following money trails several-hundred pockets deep – what does the Bill & Melinda Gates Foundation have to do with Free Software? Is Stallman so desperate to make Mr. Gates out to be the bad guy that he’d sink this low?

Stallman, one of first people to accuse people of spreading FUD to further their opinions, doesn’t stop there:

Gates is personally identified with it, due to his infamous open letter which rebuked microcomputer users for sharing copies of his software.

It said, in effect, "If you don’t let me keep you divided and helpless, I won’t write the software and you won’t have any. Surrender to me, or you’re lost!"

Here Stallman is referring to Gates’ now-famous letter asking people illegally copying, distributing, and using Altair Basic to stop. Stallman somehow neglects to mention that – regardless of whether morally acceptable or not – Microsoft had the legal right to demand payment in exchange for their software. Ignore for a second whether or not Bill Gates and Microsoft were in the right or in the wrong to ask for payment in exchange for their work – is Richard Stallman seriously suggesting that it’s right to illegally obtain copyrighted software?

It’s one thing to say that Gates should never have charged for his software and another to say that it’s OK to use it without paying. Gates chose to ask for money, users (as Richard Stallman himself has advocated on many occasions in the past) should be looking for an alternative if they don’t want to front the cash.

Who Richard Stallman thinks he’s kidding, we don’t know. But he’s obviously crossed that line that shouldn’t be crossed; apparently desperate enough to stop Microsoft the minute he senses an opening… even if it means spreading FUD, making pointless accusations, and generally talking nonsense to get his point across. This isn’t any way for a respected figure in the open source community to act, especially not when it comes to someone who has – whether Stallman likes it or not – contributed as much to the tech community as Bill Gates has.