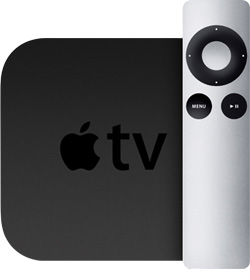 Yesterday, while at the Apple Store for a free replacement clamshell/LCD for my 15″ MacBook Pro Retina (sudden-onset ghosting issues, to use a medical term), I caved-in and got an Apple TV. It’s something I’d given plenty of thought to in the past, but was never really sold on. In the end, the $99 price tag and my growing frustration at streaming Netflix shows and movies from my desktop to my plasma HDTV won me over.

The initial experience was pretty much par for the course: beautifully packaged, incredible attention to detail, sexy product, and gorgeous cabling. I made sure to tuck the box away somewhere safe, because Apple boxes are too beautiful to throw away.

But that was where the bliss ended and the agony began. Because of the sheer tinyness of the Apple TV compared to all my other media products, and because lag is not a primary concern as it would be with a gaming device, this was the first time that I decided to connect one of my media products via wifi instead of over ethernet (XBox, HDTV, printers, and more – all connected to a gigabit router).

I’d heard complaints about how awkward it is to use the on-screen keyboard for the Apple TV combined w/ the very minimalistic controller, but also how it was offset by the Remote app for iPhone. But before I could use the Remote app, I’d have to connect the Apple TV to the wireless 802.11n network.

Here began my woes for the afternoon: painstakingly typing in a 13-char alphanumeric passkey, one letter at a ridiculously slow time, and lo and behold, the Apple TV says “failed to connect. Check password.” (or something to that effect). No problem, must have miskeyed the passkey, right? Try again…. and same thing. Once more for good measure – but alas, it was not to be.

Instantly, my mind began racing. Is this a faulty unit? Is it incompatible with my Tomato wi-fi settings? Is it buggy coding unable to distinguish between the identically-named 802.11g and 802.11n networks my dual-mode router is putting out? Regardless, it was time to break out a network cable and see what we can do.

Network cable connected, I was able to finally to get the Remote app to work, but not before having to enter a few more lengthy usernames and passwords for the Apple ID verification and bonding process.

Playing off my earlier suspicion that the issue was relating to glitchy software unable to handle the 802.11n wi-fi connection, I decided to check for software updates. I thought it was a moot point; Apple products are famous for not sitting on the shelves too long, and I bought mine from a very popular Apple store (Naperville, IL). They’re almost always up to date on software updates, and the latest Apple TV update (5.1) was issued almost a month ago.

To my surprise, luckily there was a software update available. 5.1 began to download, while I quickly checked out the changelog on the Apple website for the Apple TV software releases. There was no mention of any wi-fi connection issues, but 5.1 did introduce new network profile support via the Apple Configurator app, so I figured worst comes to worst, I could at least try use the Apple Configurator app on my MacBook to create a network profile and hope for a change.

I made sure the update did not end when I moved away from the update menu – it continued to download as expected. Things looking up? I just browsed the other settings and features, making sure not to start playing a movie or save any changes. I went back to check the update progress, only to find that it had been entirely cancelled!

Stage 1 of 2 took an additional 30-35 minutes, at which time the device rebooted into “stage 2” – which looks just like the loading screen after applying an iOS update to an iPhone. I figured this would go through quickly enough, but it must have been another 15-20 minutes before it *finally* loaded to the main screen.

I decided I would try the wi-fi configuration again w/ the ethernet cable plugged in so I’d at least have use of the Remote app on the iPhone to type in the wi-fi passkey as many times as it took, but Apple TV doesn’t let you configure wi-fi connections if you’re already connected via ethernet. Obviously, I can understand the reasons behind this (and it makes sense, too!), but I was not looking forward to more pecking and hunting away on the on-screen keyboard.

So with a deep sigh of regret and much anguish as well as a few choice words for Apple, I begrudgingly unplugged the ethernet cable, used the Apple TV remote to navigate to the network settings page, just to find out that…. it was successfully connected to the wireless network I’d previously configured which it had adamantly insisted I’d configured improperly and did not provide the correct passkeys for.

Once it was up and running though, I must say, I don’t regret the purchase. It’s gorgeous, it’s easy to use, the Netflix, Trailers, Photostream, and Radio apps are beautiful, functional, and very intuitive. I can configure it to never sleep/shut down without worrying about electricity (1 to 2 watts idle? that’s 1 to 2 dollars a year!), thereby having one less device to power up when I want to watch something *now*. But the unboxing? Probably one of the most frustrating and disappointing experiences of my tech career. A complete antithema to the traditional Apple unboxing and setup experience that left a very sour taste in my mouth.

One thought on “A most-miserable Apple TV unboxing experience”