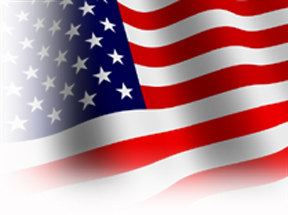 It’s Memorial Day weekend all over the nation today, but here in the midwest we’re also in the middle of a record-breaking heat wave: today’s 97º F high in Chicago shatters the historical high of 94º F set way back in 1911 (although the night’s 80 degrees Fahrenheit is actually fairly pleasant if you’re sitting outdoors enjoying the breeze). We all know better than to leave our kids in a locked car that can reach 140º F on a normal summer day, right? But what happens when you leave an iPhone in a car parked in the sun on a day like this? 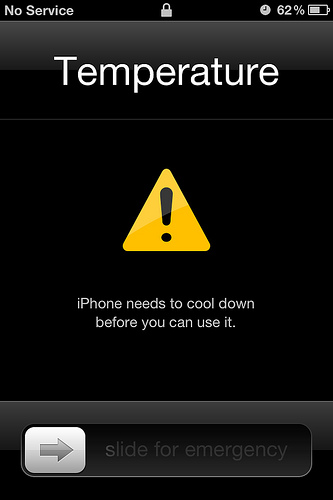 If the iPhone detects that it’s in conditions outside its designed operating range (-4º to 113º F), it’ll switch into a low-power mode, turning off the radios (cell, wi-fi, bluetooth) which produce the majority of the heat, and pausing all apps and background processes.

This isn’t by any means new technology or anything earth shattering, and there probably are other phones that do this – just not any that I’ve seen/owned and have pics of to share. There’s also another company/product that has been using this tech to great effect for quite a while now – quick, what other device might you usually leave in a locked car on a sunny day?

Give up? Your GPS of course! Garmin nüvi devices (starting at least with the 3790, also in the latest models – gotta love the HD Radio live traffic updates!) will automatically switch off if left in a hot car (very helpful in some cars (read: German makes & models) that do not power down the 12V DC port when the engine is turned off). The next time you turn it on, you’ll see a little pop-up that informs you it was turned off automatically to prevent it from overheating:

(Note: like with the iPhone, “turned off” doesn’t actually mean it powered down – just that the display and radios were powered down temporarily).

OK, so everyone knows that extreme heat is bad for electronic devices – does that mean that we should try to cool them down as much as we (feasibly) can? Well, Chicago is actually more famous for its cold weather than for its hot summers, though we do tend to have more than our fair share of both. What happens when you leave your mobile device in the car over a frosty, cold night – is it going to operate even better given how we’re always trying to get CPU temperatures down and minimize heat output?

A tip for our readers in warmer climates: it would be incorrect to say “in the middle of a blizzard” as normal blizzards are much more likely to happen in the “warmer” freezing weather than at −27° F.

The answer: nope. Just like humans, electronics have sweet spots too. They don’t like extreme heat nor extreme cold. What happens to mobile devices in the extreme cold is pretty cool to witness (no pun intended): their LCD screens slow down and start working in “slow motion!”

This is well-documented behavior (PDF warning), but doesn’t seem to stop people from wondering. It is interesting to watch – my first experience with this was with a trusty old TI-83+ that I had left in a car parked outside overnight back in the day, then tried to use at 6am. It “worked”, but it was like watching a replay of the scene in slow motion. The screen was redrawing once every few seconds – which was neat for the first 10 seconds or so, until the novelty wore off and the impatience started kicking in.

From the links above and the results of a Google search, you can see this is an issue people most often notice in the LCDs built into the cars themselves – after all, that’s the one thing you’d have a hard time removing for the night!

Of course, if you let the LCD cool down even more than that, say past -65º F, that’s when things will actually go wrong and irreparable damage will occur as the liquid in the Liquid Crystal Display freezes and expands, permanently destroying the components in the process. Other parts of the mobile device (depending on what it is) might fare a little better (i.e. will work once warmed up again), but it’ll be good bye LCD for sure.

Anyone with links to cool videos of things exploding or experiencing time dilation (ok, not really) as temperatures go up or down, post them below or give us a heads-up @neosmart and we’ll glad post links and pics. In the meantime, take good care of your electronic devices and they’ll take good care of you – or make sure you get that extended catch-all warranty!