As the years go by, I find that I growingly have less and less patience for dealing with experimental or beta software, and have come to appreciate more and more the value of having stable, reliable, and consistent products that get their job done and keep out of the way. I find it hard to fathom that only a few short years ago, during the days of Longhorn beta, I would derive immense pleasure from formatting and reinstalling up to three or four times a day — these days, I find setting up a PC for use after a format to be a task I shy away from even once every two or three years.

When Chrome first came out, I was quick to switch to the beta channel and later, the dev/canary channels too. Now, I just want to go back to having a browser that I can actually expect to load pages correctly, keep my keyboard shortcuts intact, and not suddenly put my data at risk due to broken back button behavior.

Switching to a more unstable build with Chrome is ridiculously easy: just download the installer for either the beta, dev, or canary Chrome channel releases and it’ll automatically upgrade your profile to the latest version and pull updates on a more-frequent schedule, on Mac, Windows, and Linux alike.

Switching from beta/dev/canary to a more-stable release isn’t as easy, however. When you use a “newer” version of Chrome, the data in your profile is usually upgraded to a newer format. Newer versions of Chrome can read data from older versions, but older versions don’t know about and cannot understand the data from newer versions.

On Windows, you can switch to a more stable release by using the channel-switching tool Google released, it’ll basically freeze your browser at its current version until the stable build reaches the same or greater version number. There is no such tool for Mac, though.

The instructions below will do the same thing, but manually. First, turn off automatic updates by opening up a terminal window and typing the following:

Now see what version your current copy of Chrome is running by choosing “About” from the Chrome menu: 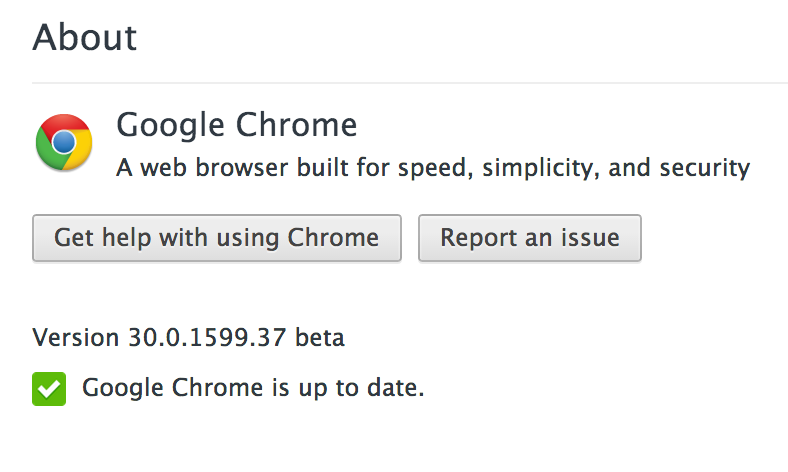 At this point, you need to keep your eye on the Chrome release blog, and wait for the channel you wish to use to “catch up” with the version you’re currently running. Once it has reached or passed your current version number, you can download the .DMG containing that version of Google Chrome, and install it the normal way. At this point, the more-stable channel will be compatible with the profile data from the less-stable channel, and we can re-enable automatic updates by executing the following in the terminal: