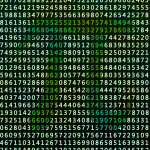 In keeping with the yearly tradition, we find it part of our mission on this earth to make bring the good news to all: Happy Pi Day 2016!

Pi Day, derived from the co-incidence of March (3) the 14th (3/14 here in the USA, and a little more-clunkily expressed as 14/3 for our friends everywhere else in the world) and the first 3 digits of Pi (3.14), is a day of gratitude, thanks, and appreciation for the magic of numbers.

We could probably get away with repeating our post from Pi Day 2008, in which we explore π, Φ, i, and e, but we have more exciting news to share today: in what’s being hailed as a possible breakthrough in mathematics, a new finding has just been published that may further our understanding of prime numbers. The study, published online to the arXiv pre-print and better-explained in Quanta Magazine remarks on a previously-unnoted property regarding prime numbers: mathematicians and amateur prime hunters alike have long-observed that prime numbers have an uncanny tendency to be found in clusters separated by massive nothingness – and now we might have a clue about how the members of the clusters relate (in a very bizarre way) with one another.

Math is like that. While we’ve tracked down primes as high as (274,207,281 − 1), we still don’t actually understand them. They allow us to do amazing things in the realms of math and computer science (without them, modern cryptography wouldn’t exist as we know it). We have a few tricks for finding them “a little bit faster” but we still don’t actually understand what makes them so special or how they relate to one another – not really, anyway.

π isn’t prime, of course. It’s an irrational number that’s simply the ratio of a circle’s – any circle’s – circumference to its diameter, i.e. c = πd where c and d are the circumference and diameter of any given (perfect) circle. While the meaning of π itself may not be much of a mystery, that doesn’t make it any less of a wonder. We don’t have (or, rather, know of) any numeric system in which pi (again, it’s just circumference/diameter) is finite or rational – except to the base pi, of course.

The idea that a something as simple as the ratio of any circle’s circumference to its diameter is a never-ending, never-repeating sequence of digits – a sequence in which, mathematically, you are bound to find (if you have the patience, processing power, and lifespan for it) any other (finite) number or numeric representation of *anything* is quite astounding. Look at it this way: every single prime number we are searching for can be found at some point in the never-ending stream of Pi’s digits (or the digits of any other irrational number, for that matter). Exciting stuff!

Enough about π though, we all know what Pi Day is all really about: 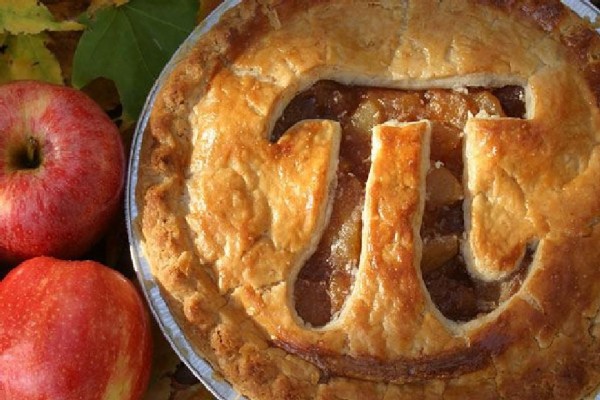 Post pictures of your day’s efforts below, share your favorite recipes, or draft a love poem (or haiku) dedicated towards π (or pie) in the comments below as you see fit!