I installed a new disk (SSD) and restored a Win7 by use of Acronis for WD edition.

The restore run without problems but when I wanted to boot from this disk (after choosing it with F12) I got the message "bootmanager is missing ..."
So I found your nice tool and installed it. Indeed, there was only one entry in the bootlist so I added one for the new disk, deployed the BCD on it and rebooted.

The bootmanger come up and I booted my old Win7 installation without problems.

Then I tried the clone on SSD but something did not work. The system started very slowly, the desktop looked a bit different and what I saw in the Task Manager was, that some system files came from C: (my old disk) and some came from D: (the new SSD). After some time, the explorer crashed and I had to reboot.

After rebooting from the old disk all looked good again.

I found the hint to change the volume id of the new installed disk so I did this with VolumeID v2.1 from Microsoft, removed and re-added the entry in easyBCD. But it did not change anything.

Do you have any ideas what could have happen and how to fix it?

Staff member
Can you post a screenshot of Disk Management when booted into your SSD, and paste the contents of EasyBCD "view settings" (detailed mode) into your post.
Terry

I booted from the SSD. Here is the screenshot of disk management, D: is the SSD: 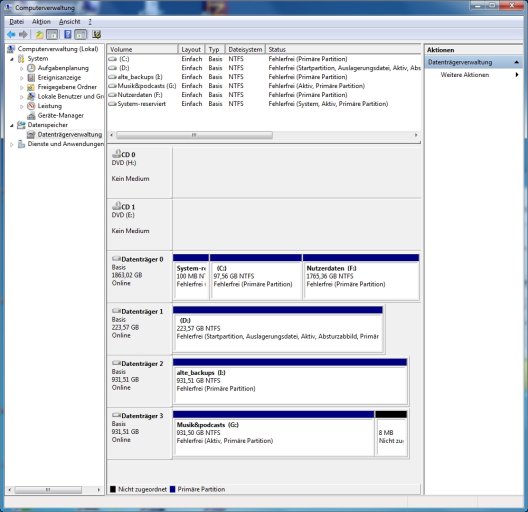 and here is the easyBCD detailed settings view: 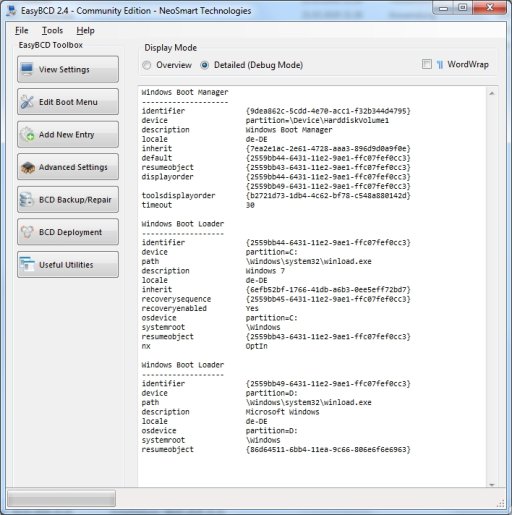 The processes are mixed: 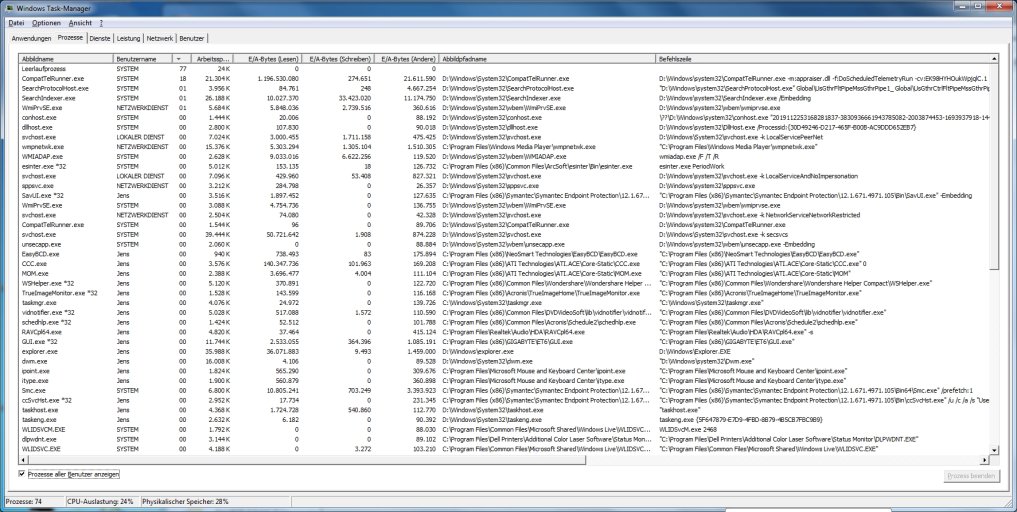 Staff member
I think your problem might be caused by the method you used to "clone" the HDD to SSD.
Each partition manager has a number of ways of copying disks, some specifically designed to move an OS, others only suitable for data. Of the OS movers, some truly clone the disk (i.e. the output is bit for bit identical with the input), some do extensive processing to modify the output so that it's a copy with a different disk letter (involving thousands of edits to registry entries)
I note that your SSD copy is running as D, so it's not a true clone of the HDD and I suspect that that's where the problem lies.
If you open regedit and look through your registry doing a find on the strings "C:\" and "D:\", do you find multiple occurences of both ?
If so, I suggest you read through the Acronis literature and read the small print relating to each of the ways it can copy a HDD, looking for a method which will make a true clone of C, in which case when you boot it, it too will self-identify as C.
On my PC the running OS (containing the "boot" flag in Disk Management (Startpartition)) is always C and the non-active OS is seen by the running OS as D.
If the other OS is booted it self identifies as C and sees the former OS as D.
(Disk letters are "virtual", only existing in the mind (registry) of the running OS, they have no physical presence on the PC)
Terry

Please keep requests for help in the forums where everyone can see them, not in Private Messages.
Posting a plea for help or information in the forum, will be seen more quickly by a widely experienced audience.
A solution in the forum could also be useful to other future visitors, so PLEASE, no private requests. (they won't be answered !)
You must log in or register to reply here.
Share:
Facebook Twitter Reddit Pinterest WhatsApp Email Link
Top