How to Move The System Boot Drive

I have a Desktop PC with a HDD that I upgraded to Windows 10. I installed an SSD and cloned the Windows 10 to the SSD using Acronis to an image restore. I installed EasyBcd and can boot into Either Windows 10 SSD or Windows 10 HDD.
Everything works, no problem although I had to use EasyRE to do a repair of the SSD install.
After all this I discovered that the HDD contains a 1GB System Drive partition that is the boot Partition and obviously the MBR. It is labelled "Boot and System". If I try to boot directly from the SSD it says "Boot Manager Missing".
What I want to do is to be able to boot from the SSD and reformat the HDD. How do I move the boot partition to the Windows install on the SSD? I have another PC that has no Boot partition like that so I know it can be done. I am also OK to create a boot partition on the SSD. I can slide the install down 1GB with Partition Wizard.
Thanks

I'm sorry but I do not accept support requests via IM, email, or personal messages

Thank you! I had missed that.
B

would you mind answering another question. On a different PC I have a Windows 7 on a HDD which is the active partition, Windows 10 on the same HDD and an SSD with Windows 7.
Windows 7 on the SSD is the system and Boot partition and I use Easy BCD if I want to boot into the other 2. All works fine.
I want to remove Windows 7 on the HDD. If I make the HDD the boot drive in the BIOS, it boots to Windows 7 HDD. (It existed before the SSD). How can I remove Win7 HDD and still boot the HDD into Windows 10 from the BIOS. This is so if the SSD fails I can still boot. If I use EasyBCD as that article states, will it do what I want as it will leave the Boot manager and MBR on the SSD untouched and I would use the BIOS boot to decide?
Many thanks

Staff member
In what sense are you using the terms boot, system and active ? In some generic way, or as reported in MS Disk Management snap-in ?
Disk Management flags have the following meanings

Yes. Per the snap-in.
1. Windows 7 on the SSD is the Boot and System Drive. It is also active. The BIOS boot points at the SSD.
2. Windows 7 HDD is Active. Windows 10 HDD simply shows as Primary.
3. If I point the BIOS at the HDD It will Boot from Windows 7 HDD as that was the boot drive prior to the SSD install.
4. I would like to delete the WIndows 7 HDD and leave only Windows 7 SSD and Windows 10 HDD, but want to be able to use the Bios to boot directly to the HDD if I choose.

So can I use EasyBCD to make Windows 10 the boot drive? It will leave the SSD unchanged. Then I could boot to either SSD or HDD from the Bios and delete Windows 7 HDD.

Hope that makes sense.
Thanks

Staff member
Boot your old W7 from the HDD as per 3 above, then change the boot partition to W10 as per the link in post #2.
Leaving the BIOS still pointing to the HDD, reboot, and select W10.
Verify in Disk Management that W10 is now active boot and system.
You can now format the W7 HDD partition and remove the W7 entry from the BCD.
That will leave the HDD able to boot directly to W10 by BIOS override should it ever be necessary.
Point the BIOS back at the SSD and reboot into W7.
remove the second W7 entry from the SSD BCD.
Terry

Thank you Terry! Much obliged, as usual!
L

The manual you posted doesn't work in my case. I get a message that the boot drive can't be changed to the destination Harddrive (See picture) 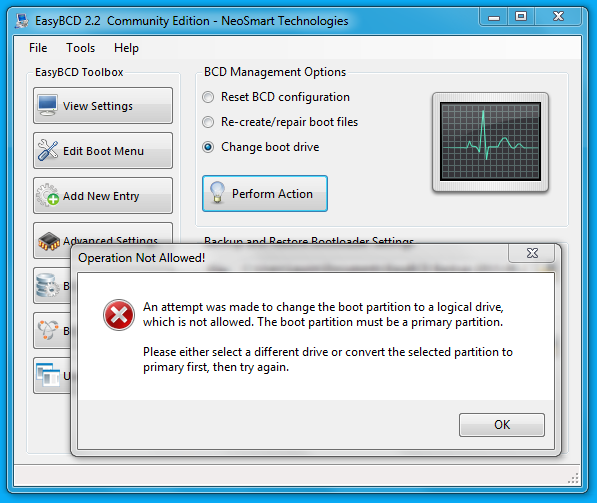 Do you have a solution for that? It would really help

Thanks in advance
B

Laulilum said:
The manual you posted doesn't work in my case. I get a message that the boot drive can't be changed to the destination Harddrive (See picture)
View attachment 3108

Do you have a solution for that? It would really help

You cannot boot from an extended partition. It has to be a primary partition just as the message indicates. You have to set up as a primary and then move it. Try Gparted or Minitool Partition Wizard. Not sure if you have installed the OS on a logical drive that you can move it to a primary unless you take an image copy and restore to a primary partition with something like Acronis. Or reinstall in the Primary. Maybe Terry has a different answer.
L

In the Disk Management Tool the cloned partitions are shown as primary partitions, so i thought this should not be the problem. But i did something else by now. I wanted to reset my pc anyway, so i installled everything on the SSD. Still thanks a lot for the quick reply!
You must log in or register to reply here.
Share:
Facebook Twitter Reddit Pinterest WhatsApp Email Link
Top