Windows Developer Preview (Win8 demo) - Did you try it?

Staff member
I'm going to assume this thread was closed by accident, as no moderator has mentioned closing it.

Staff member
I'm not a Luddite Alex.
I skipped 98 when it was mainstream and went straight to ME. I was an early adopter of Vista and liked it (ME too come to that,despite the "lemon" reputation of both). Like most of us here I switched to W7 as my main OS before it even hit the stores, though I confess to a degree of "bitching" when the second Beta was a backward step from the first.
I'm not quite so egocentric as to think that I'm the only person in the world with an efficient work setup, and those billions of others you mention are in the main also users of a mouse and keyboard. The point being that on a desktop PC, a mouse is still more efficient than waving your arms about (any mouse, not just my highly customized version).
The bitching, (not just me, by the way) is designed to have exactly the effect you mention about the MS blogs, just get the message to them not to forget that there's still a customer base on desktop PCs, not just phones, tablets and laptops, and to make sure that an integrated OS is equally usable on all devices and doesn't make the mistake of thinking they can all be used in the same manner.
If the Betas contain that intelligent switch capability, we'll both be happy.
If W8 streamlines and improves W7 the way that W7 did to Vista, I'll be a happy bunny, always provided that it has the right GUI for my hardware.
Like I said before, I'm always ready to change (funds permitting), if the change is progressive.
I won't be the only one of the billions to opt for the status quo though, if 8 is faster under the hood, but slower at the coal-face (if I may use such a clumsy mixed metaphor). I'm confident (or hopeful at least) that MS will get the message for their own self-interest. There's a lot of potential revenue in desktop PC licences, (just think of all those office PCs across the globe) and look at how resistant some of them have been to move on from XP. (not me btw. I'd hardly been using XP before switching to Vista. The only reason I still have it available was the reason why I ended up on this site in the first place. Vista didn't support the TV function on my graphics card so I needed to dual boot just to have the PC available as a backup telly. A new dual-tuner DTV card made that redundant, so my XP and Vista boots are pretty much surplus to requirements and only really there for a sense of nostalgia).
If MS launches an upgrade which is slower than what it hopes to replace by virtue of an inappropriate UI for the mountains of office hardware, the real Luddites will have all the excuse they need to ignore it.
We, the users at the bleeding edge, are the very ones who must not be uncritical when we perceive a flaw (especially one so easily fixed). We're helping MS hone the product to a larger market, and I'm sure they're grateful for the feedback.

Staff member
Eloquent response, Terry. I must say, I agree completely: it *is* in Microsoft's best interest for us to be ranting and raving. That said, I doubt it'll have much effect; Steve Ballmer has some ego-maniacal idea about single-handedly revolutionizing the PC interface like some others *cough* gates *cough* jobs *cough* have, and he's going about it all wrong and won't stop until it blows up in his face.

I have a solution, but it might be more than we bargained for 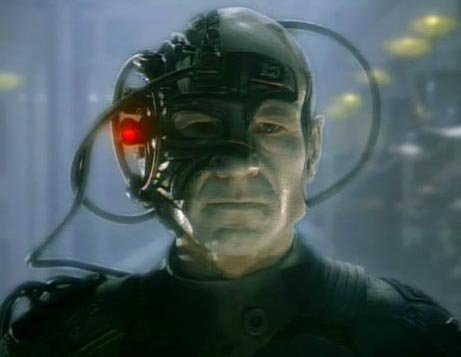 Staff member
LOL - I already tried the Seven of Nine approach and threatened everyone with 'resistance is futile, you will be assimilated' then realized that's exactly what Microsoft is trying to do.

Ex_Brit said:
LOL - I already tried the Seven of Nine approach and threatened everyone with 'resistance is futile, you will be assimilated' then realized that's exactly what Microsoft is trying to do.
Click to expand...

Yeah I figured that out myself finally, which is why I switched to Ubuntu. Version 12.04 gives users more freedom with Unity so that it can be hidden until needed, much like the Start Menu, and from there it is the same old Ubuntu that I remember. So I finally just dove in full bore, formatted all my drives that I could to EXT4 and went for it. Now it will be much more work to go back, so it isnt like I am drawn to the Dark Side anymore.

Staff member
I always had total disaster whenever I tried any Linux version so gave that up as a lost cause and it looks like I'll have to go MAC eventually, if they keep their OS going, as there are even rumours that they may go 'Windows', which I hope are just rumours.
That's assuming I'm still fit to even care about it in 2020 when 7 meets its doom.

Ex_Brit said:
I always had total disaster whenever I tried any Linux version so gave that up as a lost cause and it looks like I'll have to go MAC eventually, if they keep their OS going, as there are even rumours that they may go 'Windows', which I hope are just rumours.
That's assuming I'm still fit to even care about it in 2020 when 7 meets its doom.
Click to expand...

I was in the same boat. I tried Debian itself, openSUSE among many other distros. But I always go back to Ubuntu. It takes some time to figure it out at first, but in the end it is worth it. It isnt like Windows where you can just run your music, you need to make sure you have the codecs installed, especially ones that are not considered "free" cause they cant be included due to copyright issues. But those are part of the Media Extras pack and have compatibility for FLAC as well as OGG files among many others.

Getting the media working is the hard part. Other than that it isnt hard to use. It really is just like being in Windows but without the hassle. I have the freedom to choose what my screen looks like and can change every aspect of my theme. From the borders to the font. It is as simple as a click to do as well and doesnt require 3rd party software.

Yeah Windows 7 is still installed, but if I have a choice, it will be Linux over Windows from now on. At least I know I can keep this machine the way it is and run Linux while it still being a powerhouse for years to come instead of having to upgrade every 2 years just to keep up with the demand for Windows.
Share:
Facebook Twitter Reddit WhatsApp Email Share Link
Top