Easy Recovery Essentials for Windows is uniquely designed to take a computer that won't boot and turn it into one that does in a single click.

With a database of hundreds of issues built over the years in collaboration with IT establishments and OEMs, EasyRE is the only tool that can automatically repair your computer without forcing you to format & reinstall. Automated repair will also save you from the extensive downtime and hefty costs associated with taking your PC in to the shop for someone else to do the job.

EasyRE was developed as a standalone PC repair product, and is meant for use with PCs from any vendor or manufacturer. Some of the popular vendors EasyRE has been tested on include HP, Dell, Asus, Acer, Toshiba, IBM, Lenovo, Samsung, Gateway, and more!

Where tools like MSDaRT and Startup Repair fail, Easy Recovery Essentials doesn't. EasyRE is the only product on the market that has complete repair for UEFI machines with GPT disks.

EasyRE for Windows can repair common loop errors when your computer gets stucked in an endless loop:

EasyRE can also correct problems with your Windows installation itself. From searching for corrupted Windows system files to correcting incorrect registry references, EasyRE has things under control.

EasyRE will scan your Windows installation for common problems, taking corrective measures and reporting feedback as it goes along. New features, fixes, and enhancements are added to EasyRE's database of known Windows issues often, as our researchers and testers come across new fixes. 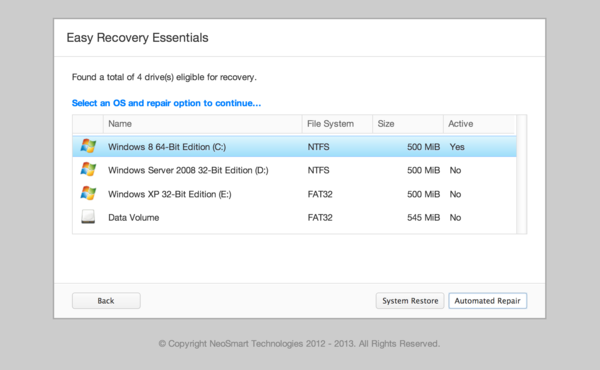 Simply select the partition you wish to repair then sit back and watch as EasyRE automagically takes care of the rest! 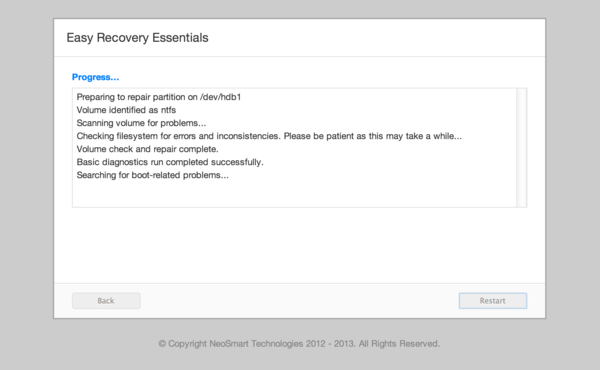