Hi. I've been troubling a lot with this (f*cking) computer called Lenovo u41-70. With very good specifications, I still had lots of lag, so in a war against my computer, I tried updating the BIOS (from Lenovo's support page). Everything seemed to be alright. However, it not only didn't resolve my problem but created a larger one. The thing is I can't access my Linux partition anymore. It seems to have disappeared completely. I'm afraid it's been formatted but I can't understand why and when this happened.

In the following picture, I show the partition I assume (because of the EXT3) is the one where Linux is stored. It seems to be empty. Maybe windows doesn't recognize the files so it's considered empty, but I don't know.

Before all this happened, the boot priority order was set so that Grub booted first, and from there to ubuntu. But now, I can't even go to grub, and windows always boots without giving any option. As an alternative, I would press F12 before start, which showed something like the BIOS BOOT MANAGER. But again, I can no longer to this.
D

One of the issues with dual-booting with both Windows and Ubuntu is that any Windows new build update will walk right over the Grub configuration in the MBR.
For this reason I no longer use Grub installed to the MBR, but instead have used EasyBCD to add my Ubuntu OS to the Windows Boot Configuration instead. 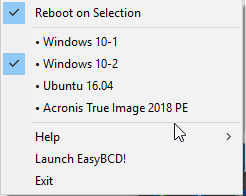 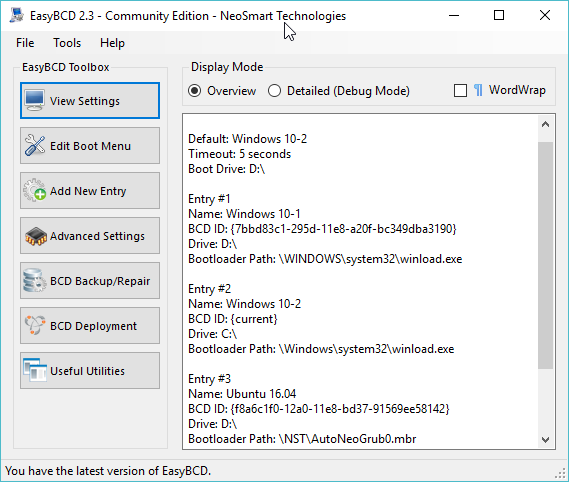 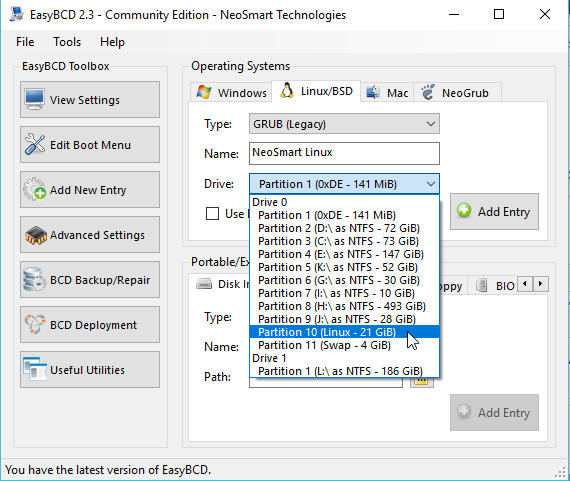 Staff member
Droyls : your PC is a legacy BIOS/MBR configuration and your solution is not applicable to nilq999's problem, since his is a UEFI/GPT PC.
EasyBCD and UEFI
Nilq999 : presumably your update has removed grub from its necessary controlling position.
I can't advise on a solution having ceased using Linux many years ago, but I suggest a search around Linux forums for advice on how to put it back in control.
Terry

Please keep requests for help in the forums where everyone can see them, not in Private Messages.
Posting a plea for help or information in the forum, will be seen more quickly by a widely experienced audience.
A solution in the forum could also be useful to other future visitors, so PLEASE, no private requests. (they won't be answered !)
D

Terry, you are correct of course regarding UEFI and EasyBCD - I am still using older hardware which is Legacy and had forgotten about this limitation. However, the wiki page you gave the link for does offer Option 3: Use Grub2 EFI as your main boot manager for these circumstances.
For the OP of this topic, the issue here is whether his Linux was installed when this system was UEFI or if it has been converted from a Legacy boot by the action of upgrading the BIOS and converting the partitions to GPT, though that seems doubtful. Assuming that Linux was installed and working on this system, then a Linux Live CD or USB stick will be needed to get back the Grub2 boot loader. Once Linux is able to boot, then a utility called Grub Customizer can be used to ensure that both Linux and Windows OS's can both be booted.
D

Webpage: How can I repair grub? (How to get Ubuntu back after installing Windows?) has a good write-up on this issue, including dealing with UEFI systems (scroll further down the page to near the bottom).
K

However, the wiki page you gave the link for does offer Option 3: Use Grub2 EFI as your main boot manager for these circumstances.
For the OP of this topic, the issue here is whether his Linux was installed when this system was UEFI or if it has mcdvoice been converted from a Legacy boot by the action of upgrading the BIOS and converting the partitions to GPT, though that seems doubtful.
You must log in or register to reply here.
Share:
Facebook Twitter Reddit Pinterest WhatsApp Email Share Link
Top