Staff member
Another thing to remember is that Windows 9X platform (95, 98, ME) were all just DOS Shells. They basically gave DOS a GUI or Graphical User Interface. At the core they were still DOS they just looked really pretty for the time.

That is how installing ME would give you DOS support. Since ME was just a DOS Shell. It wasnt until Windows 2000 and a year later XP that Microsoft moved completely away from the DOS shell and went with their own complete OS. That is why you dont see the DOS Prompts with the MSDOS Icon after the 9X platform. 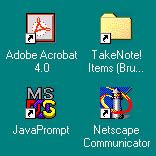 The lower left hand corner is the image i am thinking of.

“It wasnt until Windows 2000 and a year later XP that Microsoft moved completely away from the DOS shell and went with their own complete OS. That is why you dont see the DOS Prompts with the MSDOS Icon after the 9X platform.”

Actually there were two families of Windows. What is known as Windows 9.X which consists of Windows 1 through 3.11, Windows 95, Windows 95 B (ORS2) (( original equipment manufacturers service release version 2) and Windows 95 C, Windows 98, Windows millennium.

Windows NT 3, NT 3.51, NT 4 (1996), Windows 2000, Windows NT was developed jointly by Microsoft and IBM. Development started in the late 80s and Windows NT was originally released in 1993. IBM and Microsoft had a falling out in 1990. Subsequently IBM released OS2 as an operating system that could run programs written for Windows 3. They priced it slightly more expensive than Windows NT. When Windows 95 came out all the programs for 95 had to be rewritten. After this they wouldn’t run on OS/2 and hence OS/2 died.

Windows XP was the union of the two families of Windows into a single release. Or you could look at it as the death of the Windows 9.X family of Windows operating systems with just the NT family continuing. Up until this time Microsoft couldn’t get games to run as well on Windows NT as on Windows 95. Also Windows NT required more RAM and back in the mid-90s RAM was exceedingly expensive.

Staff member
Yes i know of the 2 different families. I have created a topic showing the release dates of just about every version of Windows to home users. It is on another site, but it was done by me with very little input.

I didnt separate them cause the average user doesnt know or care to know of the branch of versions. They know of Win 95, 98, ME, 2000, XP, Vista and Win7. They dont care that the XP is a hybrid of the 2 branches, they dont care that Win2000 is technically the NT branch. They just know of them.

So thank you, but i do know this information. I just dont deem it necessary to share it with the world since it isnt needed to be known for everyday operation anymore.