Staff member
Well following directly behind Pi Day we have the Ides of March. For anyone who doesnt remember this day it is the day Julius Caesar was assassinated.

Just some more food for thought since Guru brought up Pi Day.

Staff member
Anyone who's interested in the "what's happened on this day in the past" trivia, should take a daily glance at the BBC home page
http://www.bbc.co.uk/
where (as long as you have the history panel selected) you'll see a number of such anniversary entries.

Staff member
It's too bad few people read Shakespeare these days....
"Beware the ides of March!"

.... My cat was born two years ago today

Staff member
Happy birthday to your cat CG, what's his(her) name ?
We used to have 4 cats, but sadly the last of them died last year (all of old age, but a great emotional wrench all the same)

Staff member
Her name is Smokey...
I posted a picture here once, before you're time: 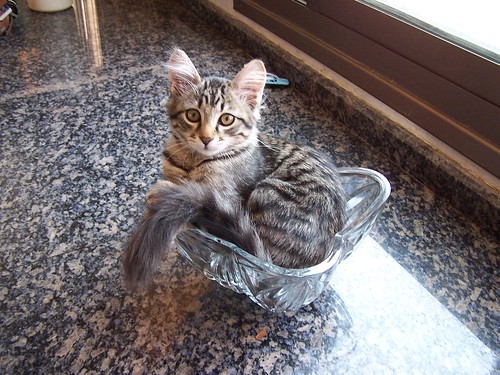 Staff member
She's a sweetie CG, and very like our cat Maisy, the last to die.
This was her 19 years ago when we'd found her a few days earlier, abandoned by the side of the road. (she never lost the love of sitting on my shoulder until her last few weeks when she lacked the strength and the balance)
Last edited: Mar 11, 2009

Fortunately I've never had a pet die on me, though I did have to leave behind a cat I'd had for 10 years when we moved from Chicago to the Middle East since we couldn't take him with us........ Quite a painful experience.

Not planning on getting any more kittens to take their place?

Staff member
She was about 8 weeks old at the time she was abandoned we reckoned, she got a lot bigger.

Eventually she draped herself round my neck, front on one shouder, back on the other. She earned the nickname "Cap'n Flint" after Long John Silver's parrot.

It is incredibly emotional losing a pet, very traumatic. Ours all lasted to a good old age (which I wish to Smokey), whereas my sister has lost 2 to road traffic in a tiny quiet village. I'm not sure which is worse, the sudden shock or the slow inevitability of an age related decline in health, and the heartbreaking decision as to whether and when to act to end it.

We've decided not to get any more kittens because we've not had a holiday for 21 years until last autumn. (We've lived in isolated rural locations without neighbours all that time, and had nobody to look after them if we were out for more than a day)

(though I showed my wife Smokey's pic, and she was immediately planning a kidnap attempt till I told her you were in Jordan ! )
Last edited: Mar 15, 2008

Staff member
I had to leave Smokey alone on more than one occasion, she manages quite admirably. Judging by the fur residue, she doesn't move off of my computer chair; where she usually lodges herself between my back and the back of the chair (she's there now)... physically it's not the most comfortable, but it's a wonderful emotional feeling otherwise

If you don't mind my sharing some advice: that's not a good enough excuse not to get another pet!

I've had a cat and a rabbit die on me. (both crushed unfortunately) We had them when we were moving and both had things fall on them. I have a cat and a parrot ( not my old one). Its a cockatoo called Tweety. Very friendly but unfortunately wants to be held all the time or he'll start screaming.
Anyways very nice cats Terry and Mahmoud they look alot like each other.

P.S.
Amazing how Julius Caeser can turn into our favorite pets

Staff member
It's "The Water Cooler Effect." Better get used to it, because it's not going anywhere

My Queen (that was her name) died last summer, I had her about a year, if my brain still works. There are photos of her in photography thread in here.

She was spending too much time outside, and... yeah, something happened to her.

but back to the topic if every time somebody was assassinated there was a holiday we wouldn't leave home
Last edited: Mar 16, 2008

Staff member
What does Pi Day have to do with assassination?

No one killed Mr. Pi or anything of that sort.....

Staff member
I killed some Pi last night. But it was chocolate Pi.

Staff member
That is your opinion. You are entitled to it. I remember back in school when things like this actually meant something. Pi day can mean something if you wish. The Ides of March is a tribute to a great writer of all time. Tis a shame people have such disrespect for his great works.

Pi day sounds pretty cool in my opinion. Same with the Ides of March.
But i guess when youre in school all that matters is if youre getting a day off or not.

but as Mak said you have to appreciate the day for what it stands for. In case of Pi it maybe one of the best mysteries.