Think I have a conflict in boot

I then decided to remove XP from this particular PC and just have it boot to 7 with no dual boot.. I used easy BCD to remove the instruction for the XP dual boot... I was given the advice to reformat the old drive with XP on it

Now when I boot I get a primary disc error.. During the post it does not recognize one of the sata drives, even though the sata auto setect part of the post reports it.. If I check the HDD order in the BIOS I also only one HDD

The odd thing is I can boot if I do the following..going into the Bios and changing the sata to ahci, save and restart, back into the bios and change it back.. It then recognises the other hard drive lets me change the order of the HDD boots and boots and starts up fine

HAve I created/confused the syetem and its got two bootmgrs or something? 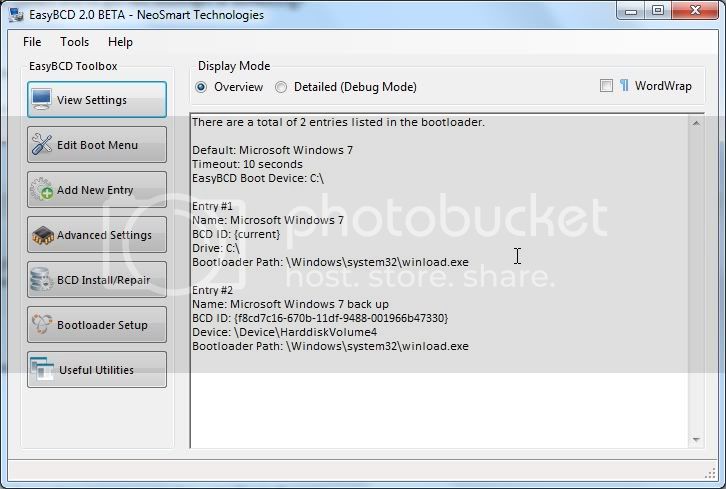 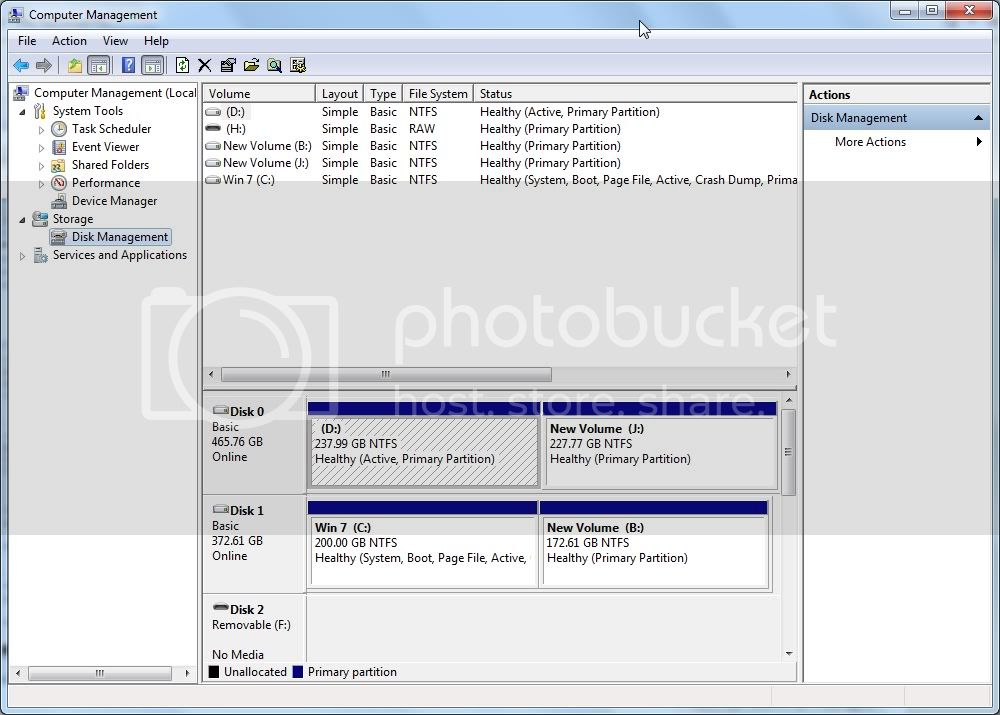 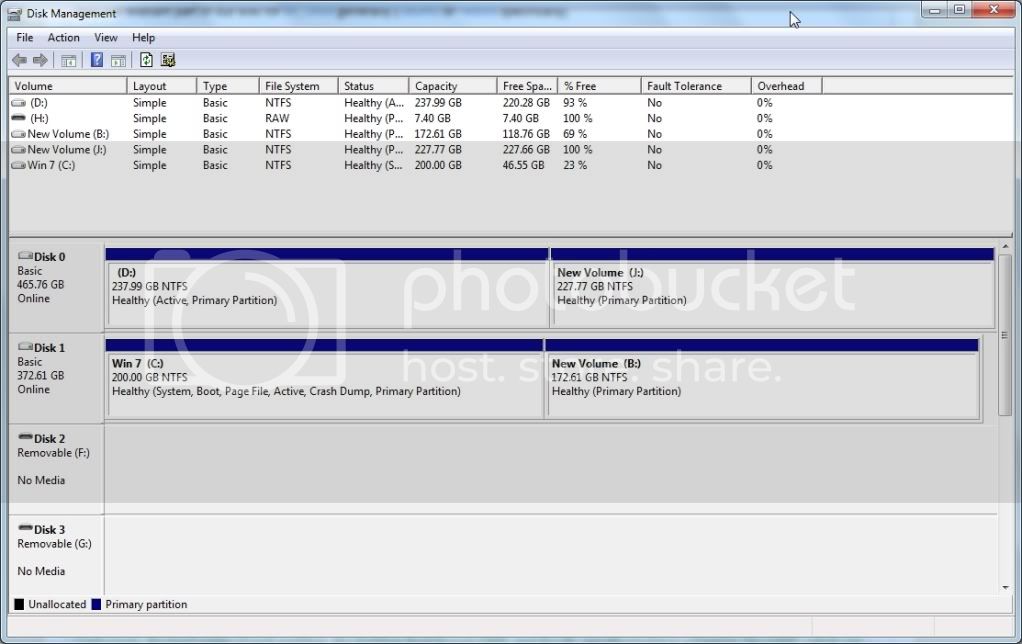 Staff member
"active" tells the MBR where to find the boot files.
Therefore there can be only one per HDD
Your problem appears to be simply that you're attempting to boot from the wrong HDD.
You need to change the BIOS boot sequence to select the W7 HDD first
You can delete the last entry from the boot menu to stop a menu displaying, and to enter W7 directly.
Last edited: May 24, 2010

Both Hdds have win 7 on them now.. But my original one is the one showing on c, but I keep finding when I turn off and reboot the sata for that drive wont show and I get primary failed press f1..

I can solve this by selecting AHCI in the bios, rebooting, entering the bios angain and changing it back to IDE .. Then the bios picks up all the drives..

Can I remove the boot for the win 7 i dont need and just reformat that drive?

According to the DM screenshot, you're obviously already booting from W7's C: HDD. If you weren't, the "system" flag would display on whatever HDD you're booted from, I believe.

What's with the other hard disks? Try disconnecting all but the one you're trying to boot from, then try again.

Theres ony two physical (as in the component) , each hdd has been split into two..

One other odd thing, when I ask Easy BCD to Change the Boot Drive to C: it always gives the following error

Can I simply delete the win 7 thats on D: and reformat this disc as having two win 7s on two drives seems to be confusing everything

My management looks wrong compared to t he example, I want it to boot to Disk 1 and want disk 0 to be an empty disc which I will use for back ups 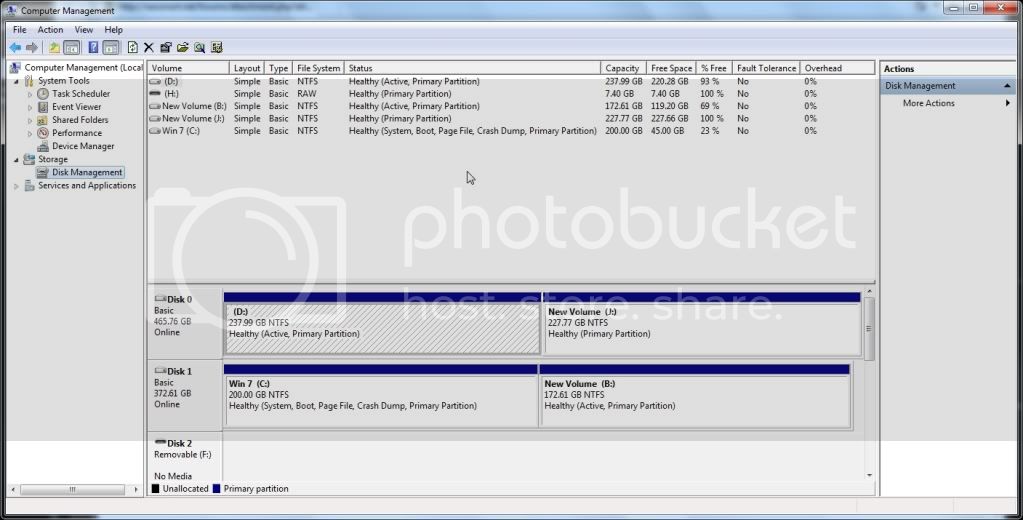 Don't rely on what Disk Management shows in regards to HDD ordering in the BIOS boot sequence. It almost always gets that wrong.

As for the EasyBCD exception, you're not supposed to try to change the boot drive to what is already the boot drive. C: is both "system" and "boot", so there is no reason at all to use that function in your present situation.

Staff member
Have you been into the BIOS boot device tree stucture, down to the HDD level, and made sure that the smaller HDD is before the larger in the boot sequence ?
Your C: disk is "system", (that's where it's booting from), and "boot" (that indicates it's the system that's actually running)
Jake is right that Disk Management can't always be relied on, but as a general rule with an all-SATA configuration, the HDD it lists as Disk0 is the one that the BIOS is trying to boot from. It it has a problem (which you seem to be describing), it will try the next HDD in sequence (the one you're successfully booting and running)

I think that was the problem.. However when I change it in Bios something odd happens.. 50% of the time (after the sata auto detect meassages appear ehich find two hdds and a dvd drive). Instead of the post then listing the details of the hard drives it only lists the details of one hdd and then pauses for a long time before listing the dvd.. It then doesnt give details of a second hdd at all (the one I want it to find).. This then makes it impossinle tochange the hdd order in the bios as its only showing one hdd..

But the daft thing or frustrating thing is the other half of the time its fine!! Cables seem ok, both hdds spin up .

One other thing..When I have a good boot and reset rather than shut down I always get a good boot but I just noticed when I checked the HDD that all though the correct (smaller drive) is listed first in the boot order, in the details for each sata it says this drive is a slave and the other one is master (I thought I didnt have to bother with this with Sata drives)
Last edited: May 25, 2010

Staff member
There is no master/slave for a SATA disk
Are you emulating IDE mode in the BIOS ?
Try switching cables between the HDDs and the mobo, in case one of them has an intermittent internal fault. The symptoms will move with the defective cable, or stay with the defective HDD if that's at fault.
If the latter check whether SMART is showing problems with the HDD.
Share:
Facebook Twitter Reddit WhatsApp Email Share Link
Top