I accidentally corrupted that setup and couldn't recover... so I deleted the Win 7 partition, made a new partition, and re-installed Win 7... the dual-boot works fine... but I noticed when I boot into that Win 7 partition, it shows itself as the E:\ drive, unlike before. A few programs wouldn't install, saying there was a corrupt file structure

Can't tell if maybe my hard drive is failing, or if this setup is incorrect...
T

Can anyone tell me what's going on here, what I need to do? 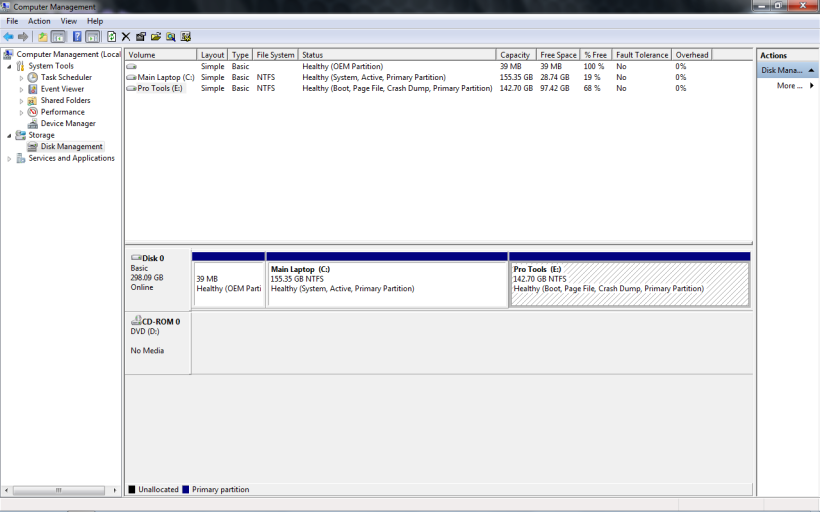 Staff member
Disk letters are not "real". They don't physically exist as part of the partition in the way the volume label field does (that sits in the MBR partition table which describes the partition). The letter is just a virtual label which only exists in the mind of the OS you are currently running (its registry).
That's why XP can call itself C when W7 calls it E. They each have their own registry, and hence totally independent and unrelated maps of devices to letters.
When you reinstalled W7, you should have done it in such a way that it could not see XP as C, if you wanted it to map itself as C (it can't map the same letter to two different places).
It has no problem with calling itself some other letter, but unfortunately third party apps can sometimes be problematic. Some (usually very old and stupid) just assume that the system is C and give you no option to change it, some give you the option to specify a target location for the install, but then are also stupid enough to insist on putting a few files into C:\Program Files\Common Files even though you've told it to install to X:\My Apps (everything from Adobe seems guilty of this, and since their flash and reader programs are almost ubiquitous, they present a real problem to a dual boot where one OS is notC but can see another which is C. Both sets of common files get written to the same place, and therefore corrupt each other).
If you've only just reinstalled W7, you'd probably be well advised to do it again. This time, set the partition where you want W7 to install "active" before you start ( and install W7 from the booted DVD (not from a running XP).
W7 will install where you want it as C. It will not "see" XP, so after it has finished, you should add an XP entry to its BCD with EasyBCD (auto-configure).
When you next boot XP, you should also consider this if you value your restore points and backups.
Unless you do this XP will corrupt all the W7 shadow copy and restore points every time you run it, and W7 will be forced to start again from scratch, which will break XP's restore point chain, also negating any chance of restoring XP in the future.


Just seen your second post.
When you installed W7 with XP as "system" "active", it added its boot files to the XP partition (normal behaviour).
Disk Management flags have the following meanings

OK, thanks very much for the reply, that explains a lot. Going to set the partition as active before re-installing Win 7 (from the DVD!)

Well, after deleting the Win 7 partition, recreating it, and setting it as active, I'm trying to re-install Win 7 from the DVD... after the first re-boot during the install, it is hanging at the "Press any key to boot from CD" point... any ideas on how to proceed?

Staff member
If the drive was created as FAT then yes it is most likely that it was a user mistake. It needs to be NTFS for Win7 to work, that would be why it wouldnt continue.

As far as the 100MB partition in front, that is a well known issue with Vista/Win7. They will create this during the install to hold the boot information, if I remember correctly.
~Alex~
Forum Moderator
Guinea Pig for Testing
T

The FAT partition in the front was already there, but yeah, somehow it got changed to active...

So at any rate, again just now, after deleting/recreate partition for Win 7 (as NTFS), and trying to re-install, still nothing, it hangs after the first re-boot... pretty frustrated...

Just seen your second post.
When you installed W7 with XP as "system" "active", it added its boot files to the XP partition (normal behaviour).
Disk Management flags have the following meanings
Click to expand...

Could this be the problem? That boot files from a previous Win 7 install attempt (that was started while booted into XP) are still on that XP partition and interfering? If so, how would I fix that?
Last edited: Feb 13, 2012

Staff member
Well you would need to use a 3rd party partitioning tool like GParted or Acronis Disk Director and have them manage the flags for the partitions. As by having Windows do it, it is only causing you issues.
~Alex~
Forum Moderator
Guinea Pig for Testing

Staff member
As I said, it's normal behaviour. (MS designed it to do that). All Windows capable of native dual-booting (XP onwards) will place the boot files on an "active system" partition if it already exists. That way the original (older) OS stays "system" and the newer (backward compatible) boot loader takes over from the older (not forward compatible) one, and the dual-boot occurs automatically.
But if you use a 3rd party tool or a command prompt to set your target partition with the active flag (there can only be one "active" primary partition per HDD), then the install will not detect the other OS and will put the boot files with the newly installed OS.
The reason why MS doesn't do it that way is because the dual-boot will not be automatically set up, but you don't mind that because EasyBCD will easily do that for you afterwards.
If you use a Linux based partition manager like GParted, remember that the definitions I gave you in the addendum of post #3 are "Microsoft speak"
In Linux (and GParted) the active flag is called "boot", not the same meaning as in MS Disk Management.
Terry

I erroneously installed Win 7 from DVD to its own partition, while booted into XP :shame:. As was explained to me here, Win 7 installed boot files to the XP partition because it was the active partition...

After deleting/recreating the desired Win 7 partition, and setting it as active (with Acronis Disk Director rescue CD), I've been attempting to install Win 7 from the DVD, to that new partition.

The problem I am having: is that the Win 7 install hangs after the first reboot, and I believe, (due to MUCH trial and error) it's because of those boot files previously installed to the XP partition... if that is the case, how can I find and remove them such that they're not interfering with the Win 7 install?

Staff member
Please don't open multiple threads for the same problem. It causes unnecessary housekeeping and makes it much more difficult to follow the flow of the problem.
If the W7 partition is now active, it shouldn't even be looking anywhere else. (I have XP/Vista/7/8 all installed this way and they each have their own independent boot files, with no problems)
However, if you want to remove the previously installed files, delete the \boot folder and all of its contents, and the module bootmgr.
You won't see them (super hidden) unless you have folder options set like this or you're using something like Linux which ignores Windows attributes.
Terry

Sorry, thought the Win 7 install hanging was a separate problem from the original post.

If the W7 partition is now active, it shouldn't even be looking anywhere else.
Click to expand...

I guess I have to conclude that the issue of the Win 7 install hanging at the first re-boot is unrelated to boot files, and is being caused by something else.
T

[Solved] - After much research and trial and error, what finally allowed the Windows 7 installation from DVD onto new partition to complete successfully for me (not hang after the first re-boot), and to then be able to dual boot with the existing XP installation, was:

For whatever reason, that sequence, for me, allowed the installation to complete successfully, with Win 7 installed on (C) drive, as desired, and my other partition, with XP, shows, from within Win 7, as the (E) drive.

Then after running EasyBCD 2.1.2 to add new entry, it easily detected the existing XP installation, and added it to the boot menu... and so when booted into XP, it's on it's own (C) drive, and from within XP, the Win 7 partition appears as the (E) drive.
Last edited: Feb 16, 2012
You must log in or register to reply here.
Share:
Facebook Twitter Reddit Pinterest WhatsApp Email Link
Top