Microsoft Can Be Impressive - Occasionally

Staff member
Last September I treated myself to Microsoft's (then) latest toy - the Wireless Entertainment Desktop 8000 keyboard and mouse combo.

I love it's features and have found it, after a few startup glitches, to be the best I've ever had, except for one small drawback. Some of the keys have started to show wear and tear. The silver finish around some of the words and letters, notably the left-hand shift key plus the E, R, T and S keys have worn away so that the original word/characters are no longer clear.

As there is a 1-year warranty I called Microsoft just out of curiosity to ask if this was considered enough for a warranty exchange. I had to fax them a copy of my sales receipt and that was all that was needed.

I just got a call from them stating that it was on back order and that Purolator Courier would be delivering me a new one sometime on or after the 15th of April.

They added that I should hang on to my old one as a standby keyboard.

I recall when I first ordered it, there was a big waiting list and for some reason its release was delayed several months....possible manufacturing issues...?
The units are made in China which could explain possible rush jobs with cheap materials and labour and associated lack of quality control.

Here's hoping that my second one will be a bit more durable.

This wasn't a cheap purchase either - with taxes, well over $300 CDN.

My last keyboard and mouse was their Bluetooth Desktop Elite set and I remember having to call them when my Bluetooth dongle burned out inexplicably. They told me then that by law they had to send a "piece of hardware" with it and so they sent me a new mouse as well.....LOL. Again, that was at no charge, even though it was well beyond the warranty period.

You can say what you like about Microsoft but I, for one, am quite impressed.
Last edited: Mar 31, 2008

Staff member
MS makes really nice hardware. From the Zune (despite it's shortcomings) to the XBox to the keyboards and mice, they do a real-decent job.

the only hardware from MS i use is a IntelliMouse Explorer 3.0A

i have the software for it too ^_^

it is the best mouse i have had yet lol

The best keyboard and/or mouse is the one you get used to as fast as possible. I got used to my old Logitech and I wouldn't change it for any keyboard on the planet, while I got no problem using any clicky-friend.

Im currently using a Wireless Intellipoint Explorer 2.0 and its been very good.
Its battery consumption is very low and the only tiny problem is the wheel kind of sticks.
But it has never let me done and i like it.

Staff member
I have the Microsoft Natural Keyboard 4000 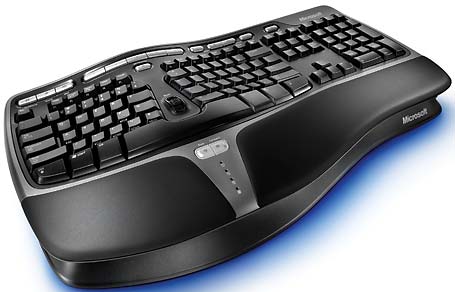 Love it. Got the wrist thing so my wrists stay level with the keyboard. Got a nice feel to it and everything. Had it for about 2 years now. Rocks!!

Staff member
That was on my shopping list a while back because I get really bad RSI problems with being constantly "at it". It lost out unfortunately to my current one. 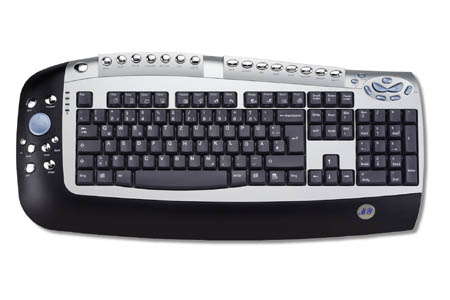 Here's my expensive beast - It cost the massive amount of £7, and it works!
I like the multimedia controls (light blue, top right) and the other pair of light blue buttons next to them which are "sleep" and "power off" (the fastest controlled shut-down imaginable)

The silver buttons on the left do cut/paste/copy/close/etc (though I normally forget to use them and click away as usual) and the PFs and the line of silver buttons above them are all customised for MS Office and therefore hold no interest for me at all. 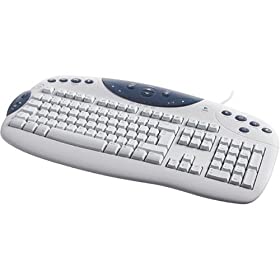 It's ancient. And in need of replacement - but I cannot find a better one to upgrade to! I bought a new MS keyboard when I bought my new PC, but then I put the old keyboard back - it's comfortable, really nice tactile-feedback (not too much like HP keyboards, not too little like MS keyboards I've tried).

If I ever get a replacement, it would be this one: 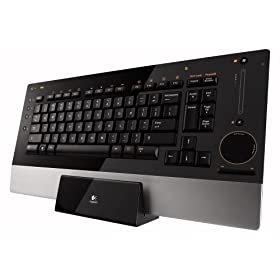 Staff member
Guru i have that keyboard as well. That is my backup. :lol:

The one you said you would buy...isnt that the LED button one?

Staff member
Mak, just click the image. Does that come with a matching mouse?

Staff member
I still like the feel and sound of the 10 year old IBM keyboard that migrated from my original Aptiva, through all upgrades until this latest. It's still going strong on the backup XP system, though it's destined to rejoin the Aptiva running W95 when I rebuild the bits. It also has a great low-light advantage that black on white is much clearer than white on black. I bought 2 of these flashy black and silver jobs and a spare floppy so that I could rebuild all the cannibalized machines with their appropriate legacy Windows version (though I haven't decided whether to put ME rather than XP on the latest backup machine because I still can't make wireless networking work on anything older than XP because my ISP doesn't support it.)
I'm still looking for advice from anyone who's achieved a working wireless network with Vista, XP, ME and 98. I've still only got the latest 2 working because the ISP installation does those itself. Nothing I've read on the subject has been of any help, it's all riddled with networking jargon that assumes far too much depth of knowledge before you even begin !
Last edited: Apr 2, 2008

Staff member
The Logitech Edge. That is a nice one.

That is the one i was talking about.

Staff member
Peter, it doesn't come w/ the mouse, but it's a match-made-in-heaven for the Logitech MX Revolution (which I'm fortunate enough to own): 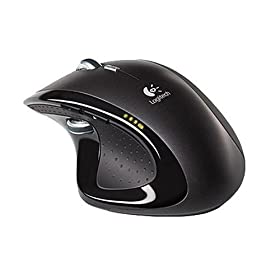 Terry, are you referring to wireless networking as in internet access or as in file sharing?

my friend has a Logitech diNovo Edge

it doesnt come with a mouse but it has a touch pad ^_^ which for the machine he use (which is a media center/TV) it workes better then a mouse but he has one anyways.

His setup for the Media center has two Keyboards and one mouse, both keyboards have a mouse builtin, the egde has the touch pad, and the other keyboard has a track ball ^_^

Staff member
Well CG, I've got wireless adapters in Vista and XP systems, and a USB equivalent plugged into the W98 laptop, and a Router connected via ethernet cable to Vista(dual boot) and wirelessly to XP.
The Vista and XP machines both connect automatically to the Internet on bootup via the router, but I can't get the W98 system to recognize the existence of any of the 3 other radio sources within feet of it, so I can't get it on the net (except through its dial-up modem) or sharing files, both of which I'd like it to do. (It's my wife's m/c and I'm trying to encourage her to do a bit of surfing now that we've finally got a useably fast connection, and I'd like to be able to sync files and backup her stuff on the master system)
I've played for hours with network settings and tried to follow diagnostic troubleshooters on Windows and my ISP, but always hit an impenetrable barrier at some point. (like my ISP's KB for W98 says "start by making a wired ethernet connection", but the old Thinkpad doesn't have one, and I bought the wireless adapter so it wouldn't need one)
Or in another case, it says "make a dial-up entry for the broadband account, make sure you select the xxxx modem from the drop down menu", and of course there is no drop down menu hence no xxxx modem.
I'd really appreciate being pointed to a "Networking for Idiots" website, since that's about my level of expertise on this particular subject. Unfortunately my glittering IT career predates such technology.
Last edited: Apr 2, 2008

Staff member
Follow up - typing this with my old clunky but very faithful "Microsoft Internet Keyboard" which I always leave plugged in. along with the equally old "Basic Optical Mouse 1.0a" - for when batteries or Bluetooth let me down, which occurs fairly often.