Staff member
Has anyone else bothered (like me - obsessive nature) to read the seventeen books of Isaac Asimov's Foundation Trilogy in their correct chronological sequence (not order of publication, but internal historical order of events).
Yes I did say trilogy and seventeen - It's a long story (in every sense)

no i haven't considering i had not heard of them till right now but i must disagree with both cg and peter i loved the divinchi code book but hated the movie did not even finish it and on another note peter i am seriously disappointed in you for watching the harry potter movies but i guess after you read the book they seem a lot lamer because you can only fit so much in an hour and half sp they skip alot of vital parts for example one of my favourite characters peeves the trouble maker but he isn;t even in the movie

Terry60 said:
Has anyone else bothered (like me - obsessive nature) to read the seventeen books of Isaac Asimov's Foundation Trilogy in their correct chronological sequence (not order of publication, but internal historical order of events).
Yes I did say trilogy and seventeen - It's a long story (in every sense)
Click to expand...

I only read one or two of the series - I remember liking it, but I somehow never did get around to finishing.... I guess I'll have to do that soon!

Ender's Game has to have the most-convoluted mix of chronological vs. publication dates: 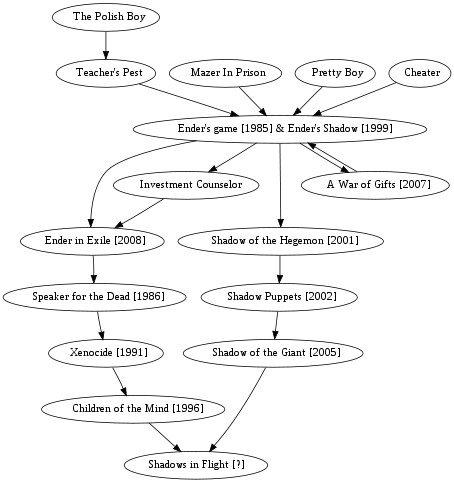 Staff member
I'll list the books in their sequence(s) at the end, but the background for the strange chronology is that Asimov wrote several series of stories (Robots , Empire, Foundation, Detective whodunit, as well as his scientific non-fiction) and sometimes there was a degree of overlap (eg Detective with robotic sidekick - Holmes & Droidson so to speak)

One day at a convention, decades after most of the stories were written, a fan suggested a possibility to him (I won't hint at it, because it's the ultimate revelation at the end of the seventeen books - the ultimate spoiler) and it set his mind working to the point where he wrote several more books linking some of the plotlines together and filling in some of the bigger gaps in the timeline.
(It's the ultimate in sagas, with a timeline of hundreds of thousands of years of human future history)
Because of the nature of publishing over a long time span, books are frequently repackaged into collections and compendiums, so the 17 books in my list could be increased or decreased depending on how you find them bound.
Robots
. Empire
.. Foundation
I, Robot (9 short stories) 1950
The Rest of the Robots (8 short stories) 1964
Robot Dreams (short story) ?
The Caves of Steel 1954
The Naked Sun 1957
The Robots of Dawn 1983
Robots and Empire 1985
. The Currents of Space 1952
. The Stars, Like Dust 1951
. Pebble in the Sky 1950
.. Prelude to Foundation 1988
..Forward the Foundation 1993
.. Foundation 1951
.. Foundation and Empire 1952
.. Second Foundation 1953
.. Foundation's Edge 1982
.. Foundation and Earth 1983
Last edited: Mar 22, 2008

Staff member
Interesting... I must read them!

Staff member
Whichever, you've left me in the dust ages ago, both of you!

Staff member
I've actually read them several times, once individually, then again as a sequence when he started to link them, and again as more were added (not content to just read the new one - I had to fit it in the sequence by reading the others too)

Not that they're my favourite books particularly, I tend to be an obsessive reader, whatever the subject of the moment. This last year for instance has seen me read 15 biographies and autobiographies of WW2 RAF pilots.

Probably my favourite book of all, if I had to choose a single volume alone to keep, would be Jane Austen's "Pride and Prejudice". She was an absolutely brilliant writer at every level. The book is full of minutely observed contemporary social intercourse, humour and satire, but at the same time is a most intricately plotted detective story.

I don't mean it's a whodunit in the conventional murder sense, but she manages to lead you, the reader, down the same false trails as her heroine, to the same wrong conclusions and prejudices, and then reveals the true nature of her characters to be other than you thought. When you go back over the text, you find that all the clues to the truth were there to be spotted like any good murder mystery writer, but a century before the genre was even invented. She is so skillful that she forces you into making the same mistakes as her characters.

I also enjoy reading comedy, and have a huge collection of Radio and TV scripts from comedy shows.

Like Peter, my wife and I have a massive book collection, very few of which are ever disposed of, and most of which are multiply re-read.
Last edited: Mar 23, 2008

Did you ever tried to write, Terry?


Ex_Brit said:
Sarge, I just noticed the bottom part of your signature...ROTFL.
Click to expand...

Terry60 said:
Like Peter, my wife and I have a massive book collection, very few of which are ever disposed of, and most of which are multiply re-read.
Click to expand...

Our family is pretty much the same thing..... the joys of reading! :lol:

Staff member
Very sad Ali. I still have books I was given as a boy, and a few won as school prizes.

Sarge, I am indeed a published writer ! How did you know ? Do you read the Hampshire Chronicle ?
When I was 12, my English teacher at school, submitted one of my homework essays, without my knowledge to the County Paper, and they published it.
I'm surprised you remember it !

Since then, my career in the print medium has really taken off. A few years ago I had a letter published in the "Radio Times".

Both of my literary efforts were of a humourous nature, in keeping with my love of written humour.
Sadly, I was not paid for either, so I'm not planning to take it up as a new career.

On your love of poetry Sarge, I'm not a great fan myself, though I did dutifully wade through the poetry as well as the novels and plays when I read "The Complete Works of Oscar Wilde", but I occasionally come across a piece that grabs hold of the emotions.

In reading pilot biographies last year I came across, and now own, that of John Magee. He was an American, educated at Rugby School in England, who joined the RAF late in 1940, and died, aged 19, not in combat, but in a training accident.

He only went on a very few combat missions, and his most exciting moment came when he mistook enemy Bf 109s for Spitfires, and was chased back across the channel, running out of fuel over the sea, and forced landing just as he reached the cliffs of home.

Not a distinguished flying career then, but he's still remembered today despite that, because of an enduring poetic legacy.
One lovely day, whilst flying his Spitfire at 30,000 ft over the (momentarily) peaceful countryside, he was inspired by the beauty of the whole experience and formed in his mind whilst aloft, a complete sonnet.

When he landed, he jotted it down and sent it to his family (he was a poetry prize winner at Rugby School, I should mention), and they published it along with his other works posthumously.

He was also a very religious boy, so the final sentiment is mere poetic imagery to an old atheist like me, but as a pilot, and an envious Spitfire pilot wanabee, the rest of the poem captures the sheer magic of flight, particularly in that aeroplane.

I'll reproduce it here and mention that it's Copyright 1942 Hermann Hagedorn, and hope they don't sue me for not seeking permission to put it here.

Oh! I have slipped the surly bonds of Earth
And danced the skies on laughter-silvered wings;​
Sunward I've climbed, and joined the tumbling mirth
Of sun-split clouds, --and done a hundred things​
You have not dreamed of -- wheeled and soared and swung
High in the sunlit silence. Hov'ring there,​
I've chased the shouting wind along, and flung
My eager craft through footless halls of air . . . .​


Up, up the long, delirious burning blue
I've topped the wind-swept heights with easy grace,​
Where never lark, or even eagle flew --
And, while with silent, lifting mind I've trod​
The high untrespassed sanctity of space,​
Put out my hand and touched the face of God.
Last edited: Mar 23, 2008

Staff member
"Harry Potter Author Considered Suicide".... how lucky for the world that she didn't!

I think the best book series I ever read was the Doc Savage novels be Kenneth Robeson. One of the greater books I read was W.A.S.P., but I dont remember who wrote it.

wow she really owes whoever changed her mind

Staff member
I don't think I need worry about reproducing the poem "High Flight" in post #31. It'll take them a long time to get round to sueing me. I just googled one phrase from it and got 11600 hits.

Evidently Ronald Regan quoted from it after the Challenger Disaster, so I'm a long way down the queue !

Staff member
I didn't write it - just posted it.


No but Ronald Reagan did use a spell checker.....sorry guys I just couldn't resist that dig...LOL

Staff member
I never use a spell checker here, just my eyes. Sorry, missed that one. (not that I was a fan of his who could be bothered to learn how to spell his name anyway)

(You're busy here today Peter - I can see your cunning plan - let me be the first... etc (in advance))