Hi,
I have been using XP and have just bought a Full copy of Windows 7 Home Premium. After looking through the forums I understood that all I had to do was create a free partition and boot from the win 7 CD and install it. From what was said that would give me an option on bootup to select XP or Win7.
I completely installed win7 seven on the free partition (I cleared D: on the XP system. When I restarted it went straight into Win7 with no XP option. I had read about EasyBCD and so I downloaded it and added the XP System to the bootloader using Add entry. I then rebooted and the two options were there so I selected XP and it loaded OK. I then rebooted and it started to load Win7 giving no dual boot options and then it asked me to repair Win7, which I did. Win 7 is now loaded but can't get XP. Any suggestions please? I haven't done dual booting before and I am puzzled. Many thanks Gerry

Are you using the latest build of EasyBCD from here?
G

Hi Justin,
Yes I think so. It is Ver 2.0.0.105
Terry
Have attached the requested files. You help would be most appreciated.
I have added comments in Red on the screen dump to show what drives were allocated in XP.

Staff member
You're presently booting W7 with the W7 boot files on XP ("system" flag), and you should only need to add an XP entry to the BCD and let Easy2 auto-configure when it offers.
That should give you a working dual-boot, but for future-proofing yourself, you'd be well advised to use EasyBCD > BCD Backup/Repair > Change Boot Drive, to copy the boot files across to W7 (point it to W7 when it asks), then edit the BIOS to boot from the W7 HDD instead of the XP HDD.
Then when you're booted into W7 and W7 shows as "system", add an XP entry and let it auto-configure.
That way your dual boot can cope with the eventual removal of XP (should you desire it in future) by the simple expedient of deleting the XP entry from the BCD and formatting the XP partition.
G

Hi Terry,
Thanks for the info so far. I have been trying all possibilities and it doesn't seem to work. As you said I used the second suggestion for a permanent solution.
Loaded Easy2 and changed the boot drive to C: so that both entries Default and entry #1 were set to C: I then rebooted. changed tha Bios (here may be the problem? - I have 3 sata drives Sata 1, Sata 2 & Sata 3. The original boot order, with just XP, was Sata 1, 3 and 2. I changed the order to 2,1,3 and it rebooted into W7 OK. I then added the XP entry using Add Entry and let it auto configure. Rebooted and there were two options in boot menu. Selected W7 and it booted OK. Rebooted and selected XP and it also booted OK. Rebooted and selected W7 again and the attached black screen appeared so I had to reboot and repair it with the W7 disk and it was all back to the start again, with default set to D: but the entry set to C: I have attached screen dumps in case it will help. Also attached screen dump for XP diskmanagement when it was loaded.
I'm getting quite confused about which disk is which I have tried selecting all three Sata 1,2,3 as the boot disk in the bios but it is still the same.
Help!

Staff member
The DM screenshots both show that XP is still top of the boot sequence (disk 0).
Are you in the correct part of the BIOS setup ?
The HDDs appear in the list of hardware, but also in the "boot" section which is generally a tree structure. The top level specifies the priority between device types (Floppy/USB/CD/HDD), then you must drill down into the HDD branch and set W7 above XP.
Only when you see W7 as Disk 0 and the W7 partition as "system", should you set up the BCD with the entries you want.
If you've got some weird BIOS that won't allow you to do that, then try replugging the HDDs. If you disconnect everything else, then boot W7, then put the other HDDs back, it will probably keep W7 top (as the last booted disk)
G

Hi Terry,
Yes, I did go to the second place where it allows me to change the order of the boot disks. I showed Sata1 Sata 2 & sata3. Will try again and see what happens. Thanks for your patience.

I have the same problem. If you could help me it would be great as iv'e encrypted some files with the xp installation and need to get back in to it to decrypt them. Windows 7 is on C and xp is on D.

Here are my disk management and easybcd screenshots 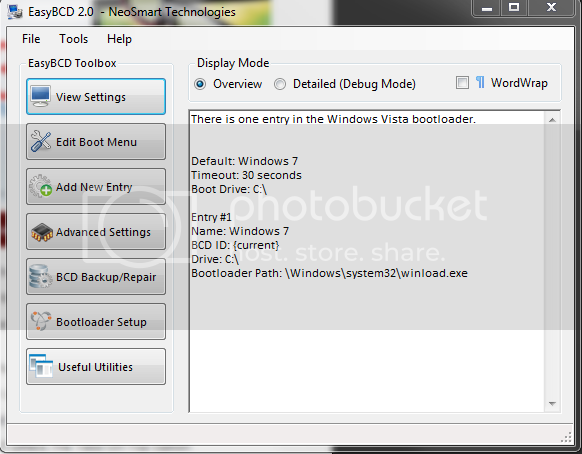 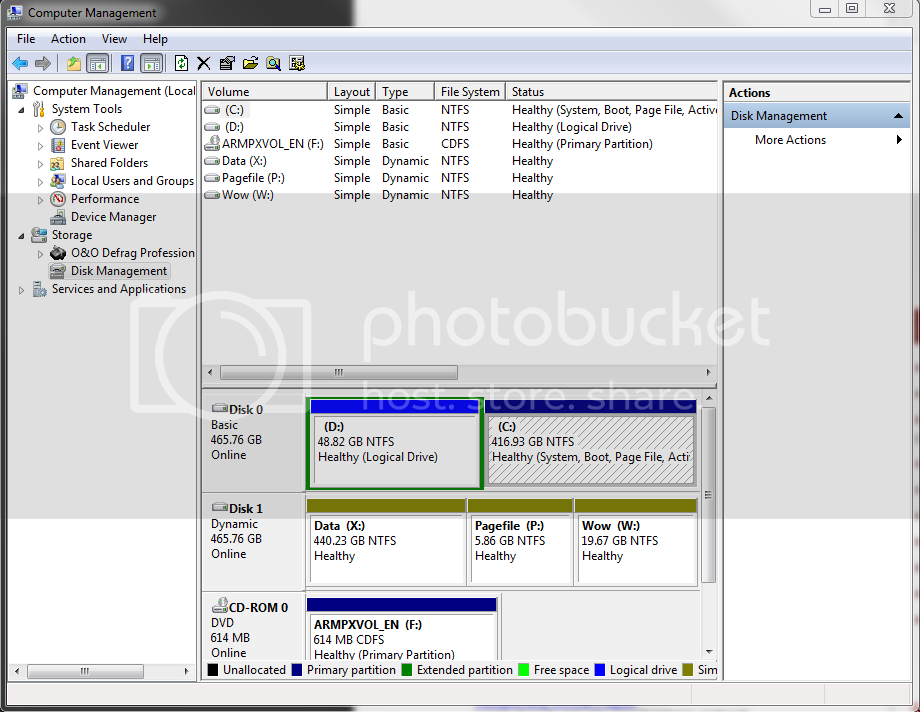 Staff member
Can't you decrypt it from within Windows 7?
D

Computer Guru said:
Can't you decrypt it from within Windows 7?
Click to expand...

No it was encrypted with xp and every time i try with windows 7 it gives the following error: 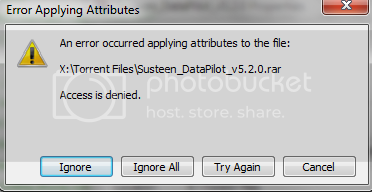 Staff member
Yeah, you're going to need to decrypt them from within Windows XP.

Technically, you can retrieve the private key used to encrypt them from your XP partition, then use a recovery program together with bot the key and your username/password for Windows XP.

Staff member
@diz
What exactly is your problem ?
Have you tried adding an XP entry to the BCD ?
M

i have simillar problem i had xp x86 and xp x64 every os on their hdd,i have 4 hdd,2 are with os and 2 are free,now i installed win 7 x64 over xp x86 and lose dual boot option,i instaled latest version easybcd 2.0,now i have option to chose between win xp and win 7,but when i try to start win xp it says

but to me says

file:\NTLDR
status:0xc000000f
info:the selected entry could not be loaded because the application is missing or corupted


Delete the XP entry.
Add a new XP entry. EasyBCD will generously ask if you want it to do all the hard work and configure everything for you. Say yes.

Staff member
mauritos, you totally lost me with your timeline there.

i posted sameone else screnshoot because dont no how make my own,except photo shoot.
http://www.myspace.com/433348329
C

mauritos said:
i posted sameone else screnshoot because dont no how make my own,except photo shoot.
Click to expand...

You can take a screenshot of your desktop by pressing the Prnt Scrn (or Print Screen) button on your keyboard, then opening up Paint (Windows menu->All Programs->Accessories->Paint), and pasting the screenshot in with Ctrl + V. Then just save it as a .jpeg image. Then upload it here as an attachment in your next post.

Guys
The error 0XC000000F with /NTLDR is nearly always caused by the same problem. When the VISTA Bootmgr program loads it does not know or care where Windows XP is. All it wants to know is "Where is NTLDR?". Remember, it is the BOOT.INI file which is loaded by NTLDR that tells NTLDR where XP is, Vista doesn't care. So. for example, if you have Vista/W7 on your C drive & XP on your D (or other drive)

1) see which root drive NTLDR, BOOT.INI and NTDETECT.COM are in
2) Put THAT drive letter as the boot entry drive for XP - NOT the drive XP is on - (if it's different)

With EasyBCD 2.0, there's a whole new (and much better) auto-detection way of doing things. You just tell it to add a new Windows XP entry, and it does ALL the rest, including copying NTLDR, NTDETECT, the creation of a correct BOOT.INI and choosing the right BCD letter.
Share:
Facebook Twitter Reddit WhatsApp Email Share Link
Top