Merry Christmas to all our Christian friends and Happy Holidays to everyone else! See you on the other side of the New Year!

Changes:
* Resolved all issues with deployment on Windows 8. No more prompts to install .NET 2.0/3.5, no downloading .NET during setup.
* Added MinimumWidth and MinimumHeight to translation. Used to set minimum window size for each dialog for each language.
* Donation dialog not shown until 3rd shutdown (instead of 2nd as before)
* Fixed duplication of drop-down box contents when changing languages
* Fixed behavior of "Load default BCD" and "Expert mode" checkboxes in options dialog

Staff member
EasyBCD build 172 uploaded, this one will need some special love and attention from any testers as it involves critical changes to the BCD parsing procedure to make it a bit more UEFI friendly.

* [EBCD-493]: Heavy modification to BCD parser to avoid "0 entries" error/misread of BCD where UEFI is installed
* [EBCD-494]: Correctly treat pae = Yes/No as aliases for ForceEnable/ForceDisable respectively
* Fixed all errors/issues/inconsistencies caused when changing EasyBCD language from the main window
* Made "No" the default button for "No entries... are you sure you want to exit?"
* Fixed reading from bcdedit.txt (was broken whenever it was that the unicode fixes were rolled out)

Note: I would not say that EasyBCD now "works" with UEFI, just that it's usable. Previously having \EFI\Microsoft\Boot\bootmgfw.efi simultaneously with the normal BIOS-compatible BOOTMGR would cause EasyBCD to be unusable. Now if you have both installed, EasyBCD will work fine with the BIOS-compatible BOOTMGR, ignoring (or not meddling with nor breaking on) the UEFI bootloader. You'll be able to use EasyBCD to do basic entry management, perhaps add certain types of new entries (LH-based for sure, other than that, I have no clue). Look at it as throwing a bone to the UEFI crowd until actual UEFI support is deploy

Staff member
Uploaded EasyBCD 2.2 beta build 180. This one fixes the majority of the outstanding issues for the 2.2 release, expect a final build "soon." Will determine what strings have been updated since their translations were provided and work to have those updated with the help of the translation 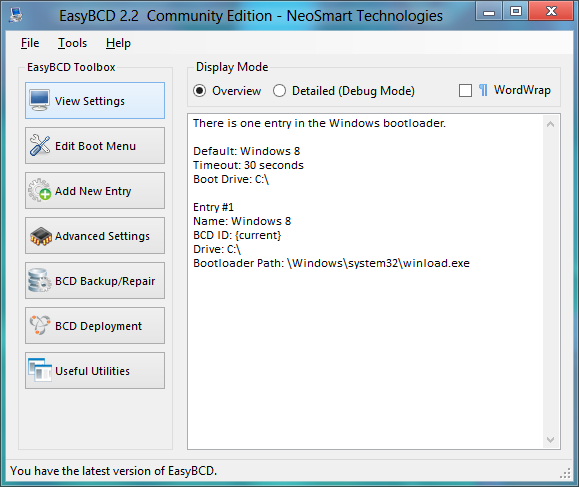 Thank you for your patience and testing.

Staff member
Ladies and gentlemen! It's been a while, and hard as it is to believe, EasyBCD development never truly stopped.
Beta build after beta build collected dust on the development PC as new features were (slowly) added, but plans to hold back on a beta release until sufficient changes were implemented had the ultimate (and much-undesired) effect of putting off the launch of the EasyBCD 2.3 beta for quite some time.

All that changes, today we have a fresh beta build of EasyBCD hot off the compilers and ready for testing. EasyBCD 2.2 has been rock-solid and truly stood the test of time (and the release of an OS and "service pack" to boot), so don't expect any enormous changes, but EasyBCD 2.3 does bring some longer-awaited changes to the table.

So, biggest changes are improved EFI support and full Metro UI options for the bootloader. Personally, I don't like the Metro bootloader, but a lot of you have asked for this feature. Note that the metro UI will only appear if the Windows 8 bootloader is in place (i.e. one or more of the Windows installations on the machine is Windows 8/Server 2012).

Without any further ado:

The biggest changes in this build are to the automatic upgrade. EasyBCD now supports in-app update notification for beta builds separate from stable. Users running beta builds will be notified of either stable or beta updates to the software. Users running stable will only be notified of stable updates (which means you'll need to install a beta build after installing a stable build to get future beta build updates. This may change with an option in the about page, perhaps persisting to "check for beta updates" if the user ever used a beta build).

Please report any issues you are having with Windows 10, as it is nearing release. I am investigating ongoing issues with the metro bootloader not showing even when the option is ticked in EasyBCD and welcome all input on this topic.

* [EBCD-530]: EasyBCD no longer shows EFI boot menu entries (from the system EFI menu, not the bootmgr EFI menu) except in advanced mode: 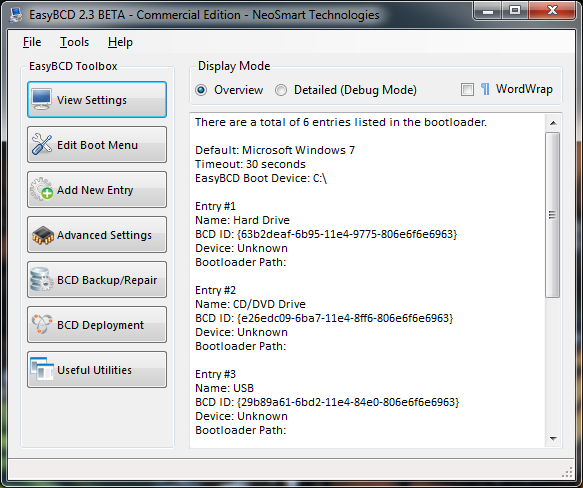 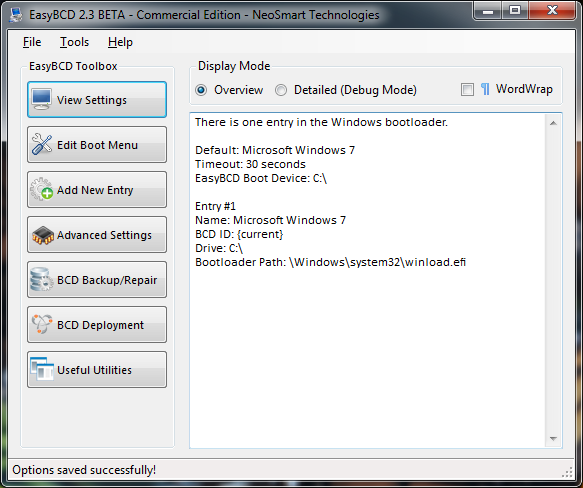 * [EBCD-532]: Refresh BCD after saving changes in options dialog (so it'll reflect changes to Expert Mode as above immediately)
* [EBCD-531]: Fixed crash on "Edit Legacy Entries" when the boot partition isn't mounted or is inaccessible
* Even smaller setup/deployable size by removing System.Core.dll dependency
* Updated copyright info in About dialog to 2015 (automatic for all languages)
* [EBCD-533]: Using HTTPS for communication with update server for security

Those of you using EasyBCD 2.3 beta build 191 and above should be prompted to upgrade automatically thanks to the new beta auto-update system implemented in the previous build! (Let me know if it doesn't do it for you!)

This build resolves all known issues with USB deployment on EFI machines.

This update is less-specific than previous builds, and changes quite a few things up beneath the hood. Will require more testing.

* [EBCD-437]: Fixes case-sensitive EFI detection
* Fixes issues with incorrect automatic BCD backup path in cases where the specified automatic backup path is invalid
* All message boxes are now owned by the EasyBCD window (no weird icons in taskbar, they steal focus from EasyBCD, can't return to EasyBCD without acknowledging them)
* Beta versions will always check for update on startup regardless of configuration or date of last auto update check
* [EBCD-438]: Fixes EasyBCD does not do font fallback correctly (was responsible for non-fixed-width font in Detailed Mode on Windows XP)
* Updated GRLDR to v0.4.5c 2014-01-17
* Fixed thread synchronization between update thread and edition checks (could result in wrong version being retrieved for automatic update. Don't think it ever actually happened, though)
* [EBCD-540]: Kill/close running EasyBCD instances when installing a new version (Hat-tip: Terry60)
* [EBCD-541]: EasyBCD settings are retained when upgrading to a newer version (Hat-tip: Terry60)
* [EBCD-542]: Fixed EasyBCD crash on startup if settings file in %appdata% is corrupted, outdated, or unreadable.
* [EBCD-543]: Fixed EasyBCD gets stuck in EFI mode (after detecting EFI it wouldn't allow EFI-unsafe operations on externally-loaded BCDs)
* [EBCD-514]: Digitally-sign the EasyBCD uninstaller

As you can see, many changes. Feedback is appreciated. Good luck and happy bug busting!

This introduces only one feature, but it definitely has a lot of potential for breakage:

* [EBCD-544]: Dynamically refresh list of drives & partitions when a USB is inserted or removed

I'm expecting problems in cases where the UI becomes invalid due to the re-enumeration of disks/drives. Things to test for would be scenarios where the selected drive in any of the ~8 combo boxes showing drives/partitions is removed, when a preselected drop-down box item is cleared but not re-selected, etc leaving the form in an invalid state.

Glad to report no problems have been reported in the past couple of months in the USB auto-refresh feature. Build 197 focuses on the bootloader display/timeout options, and addresses a few concerns:

Many changes, paving the way for a final 2.3 release soon.

The 2.3 beta program is winding down. Kindly test this build as if it were a final release.
Translators: EasyBCD 2.3's strings are now likely frozen. There are not many changes from 2.2, most new additions can be set to derive from English.

* Adds Czech (cs) translation which I previously forgot to include - thanks Tomaken1!
* [EBCD-558]: Using Segoe UI instead of Calibri
* [EBCD-557]: Recursively update UI fonts to match OS instead of only top-level form elements