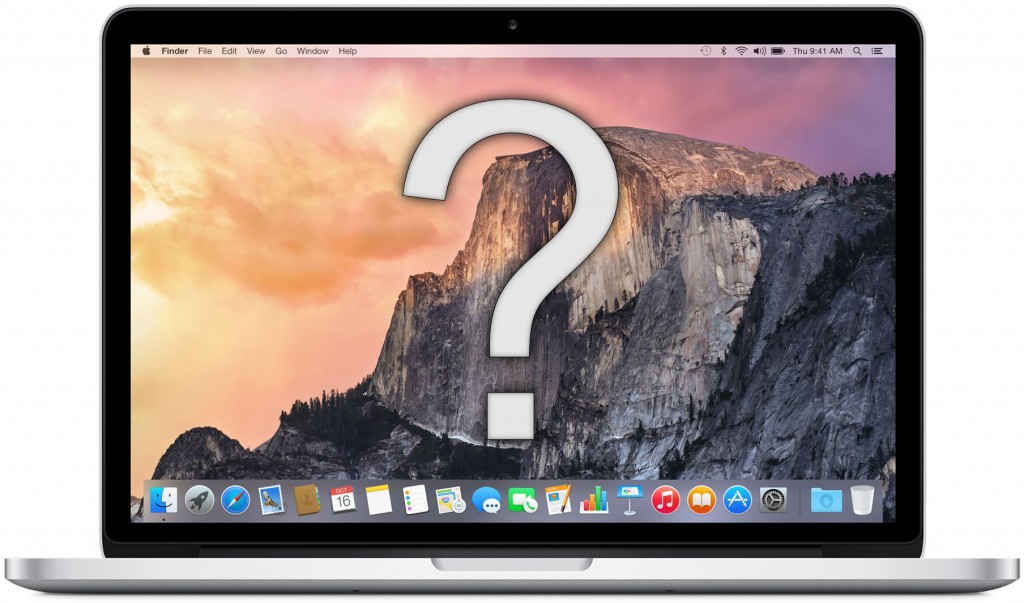 It’s a story of two Apples: an Apple that makes consumer products and Apple that makes enterprise products. Devices under or around the $1000 mark like the iPhone, the MacBook Air, and more recently, the iPad Air are eagerly snapped-up by both Apple’s consumer and enterprise marketbases with equal voracity. But Apple’s more “serious” line of hardware where prosumers and enterprises regularly pay anywhere from $2,500 to $8,500 and beyond on a single device for a single employee is another story. A $2500 laptop or a $6000 workstation isn’t a spur-of-the-moment purchase that can be bundled into your wireless bill; it’s a (non-insignificant) portion of any company (or independent professional)’s hardware budget.1

It’s obvious why Apple loves to hold its cards close and keep as tight a lid as possible on news about its product releases, upcoming features, and new designs and then stun, awe, and wow the world which turns into a mesmerized unison of ooooohs and aaaaaahs as or whomever is mimicking the world’s most famous, talented, and now several years dearly-departed salesman pulls out the newest iteration of an iDevice from a black top hat with a poof, lots of purple smoke, and a “one more thing” declaration.

But what’s not so obvious is why Apple refuses to play ball with its enterprise consumers that are looking for “boring,” run-of-the-mill updates on existing product lines, information on when certain features would become available or when hardware limitations would be lifted so that they can make their next purchase, be it a new $5000 workstation (monitor not included) for an indie developer or an order of fifty or a hundred $4000 laptops at your favorite tech company. While some of these are backed by VCs and are playing the startup game, competing to see who can burn through the most money in the littlest time with the least ROI and still , err, convince more investors into another multi-million dollar round of investments, some of these are serious companies genuinely watching their bottom line and carefully weighing purchase dates and product update cycles.

The problem is, Apple just quite simply does not respect their enterprise consumers, and does not provide even a gleam of information about when updates for products can be expected or if they’re even coming at all (though they’re still mighty-happy to sell them to you). Unfortunately, not only does Apple not release even the most meagre of official information about product releases ahead of time, it also does not have consistent release/update patterns for its non-iThingy line of products. It’s perfectly possible to check the online Apple Store one day and find the same device that’s been available for 2 years still being sold, only to check it the next day and discover that the specs have been silently updated and a new model released. And that’s only for the products that Apple updates (rarely) without much ado; for those which Apple withholds updates until a conference or event to maximize on the wow factor and obtain the biggest boost to its stock price, there’s unfortunately even less certainty as there are only so many products you can introduce at a single event without reaching a point of diminishing returns on the wow to stock price factor scale.

Intel’s year-on-year performance-related improvements (across both ticks and tocks) to CPUs for desktop and higher-end laptops have been bemoaned by enthusiasts as lackadaisical at best for the past few years, as they focused more on CPU-GPU integration and reducing the power consumption particularly for devices using their integrated GPU solutions. However, Intel’s newly-released “Skylake” brings a decent round of combined performance, GPU, and across-the-board performance-per-watt improvements to the table for mobile and desktop devices alike.

Apple’s most-recent update to the Retina MacBook Pro 15″ line still uses the Intel i7-4770HQ/4870HQ/4980HQ, originally part of the codename “Crystalwell” line, were released in Q3 of 2014, and are part of the Haswell CPU family – two entire CPU generations behind (with Broadwell and now Skylake replacing it successively). Yet there’s still no mention of when Apple will be releasing an update for these aging MacBook Pros, and customers who would rather not buy a product two months before it becomes years obsolete (because in technology anything you buy will become obsolete as soon as the next update comes around… but something that’s already obsolete when you buy it?) are left in the dark, not even knowing whether (depending on which rumors you believe), an update will be released in Q2’16 (with an announcement at Apple’s March 2016 event) or in late 2016 (Q3 or Q4) and announced at Apple’s WWDC 2016 event, typically in June.

Let’s look at the normal MacBook Pro release cycle to try and guesstimate when we can expect the next one to come out: 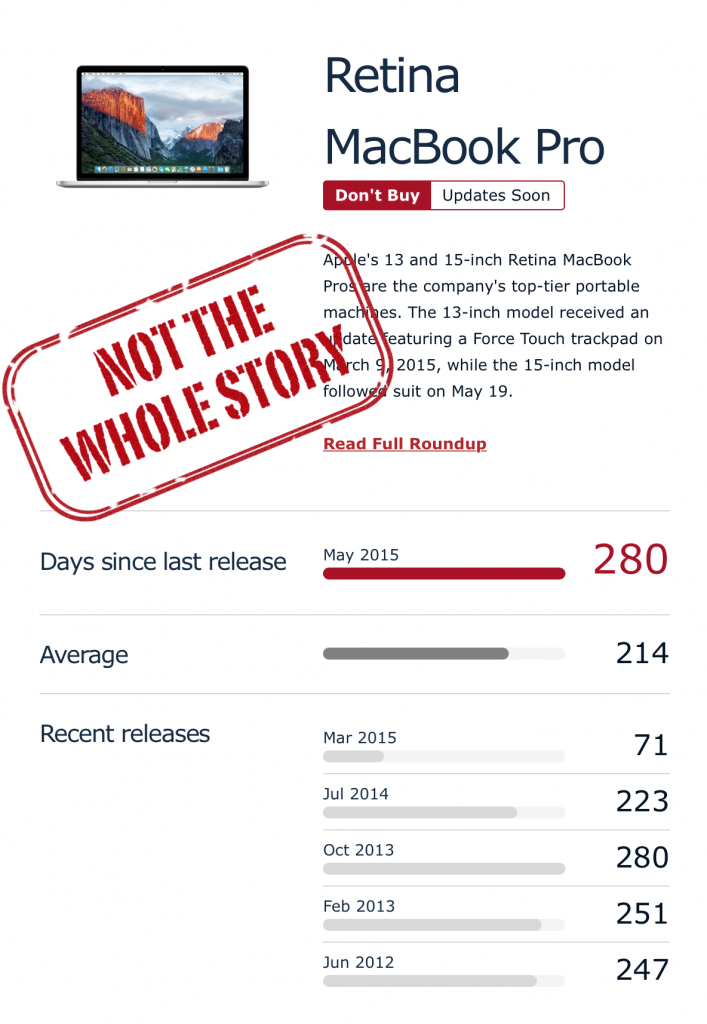 However we’re still not done, as we still have one more datapoint to include: the current release cycle. Though there do not seem to be any legitimate rumors indicating the release of either the 13″ or 15″ Retina MacBook Pro models at the next Apple event (presumably around the 15th of March, 2016), if we give Apple the benefit of the doubt and add that release date to the mix, we end up with {247, 251, 280, 294, 301} for the 15″ MacBook Pro and {113, 251, 280, 223, 372} for the 13″ Retina MacBook Pro. Notice the monotonically increasing release cycle for the 15″ rMBP? What about the drastic, all-over-the-map 13″ rMBP release cycle lengths (even when excluding the abnormally-short initial cycle caused by merging the releases of the 13″ and 15″ notebooks after a staggered initial release).

(An even better) Example: MacBook Pro

If the above illustration of the rMBP release cycle didn’t scare you enough, perhaps just one glance at the release chart for the “radically redesigned” “this will change everything” “shape of things to come” “mark of a new Apple” “proof that a post-Jobs Apple can still make bold decisions” Mac Pro will do the trick? It was a little too easy of a mark for the statistics lesson from above. 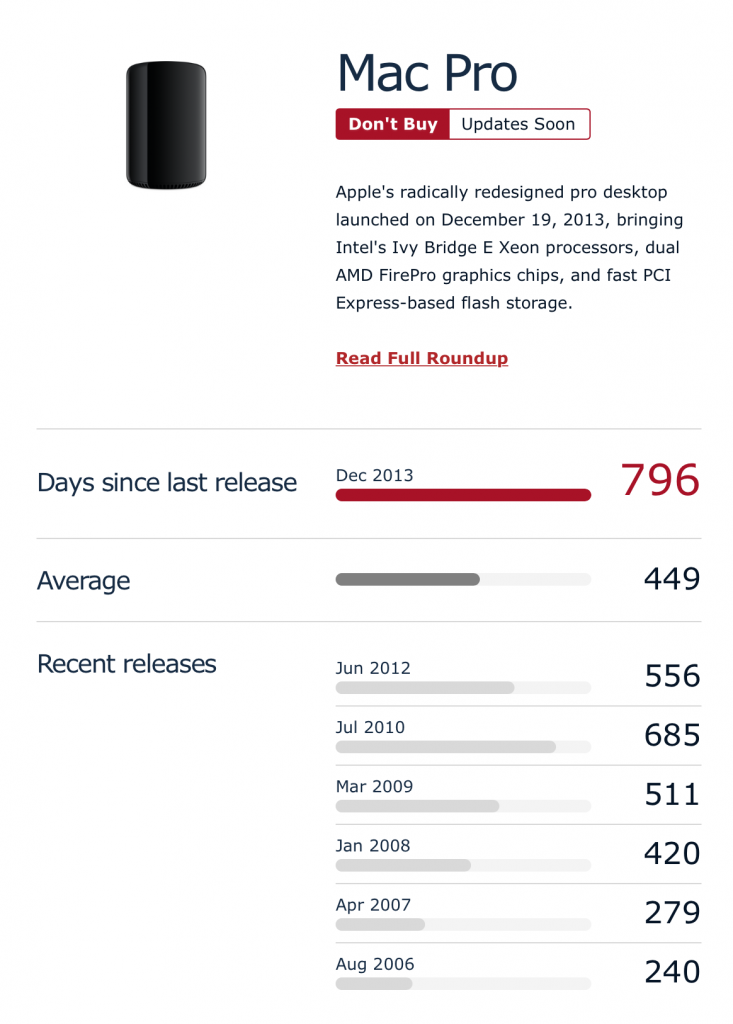 You can crunch the numbers yourself or stay tuned for another mathematical dissection of Apple’s redesigned Mac Pro’s release cycles and when to expect an update (or, at this point, if ever).

Subscribe to updates by email (see sidebar), facebook, or @neosmart on twitter to receive brilliant insight, in-depth research, and witty remarks as they’re made. Now with an extra dose of humility and modest from only the best and most-talented sources around.

One thought on “Crunching the numbers – When is the 2016 Skylake Retina MacBook Pro coming out?”