Everyone, say hello to betterpad – an open, fast, & free replacement for notepad that doesn’t suck. Inspired by text edit on Mac, this recent convert back to the Windows ecosystem needed something for random notes, quickly opening plain text files, or jotting things down – and expecting them to still be there the next time you come back to your PC.

As a text editor, it tries to remain unopinionated and keep out of your way.. while supporting whatever you throw at it. It doesn’t choke and die when it encounters a unix line ending and it’s smart enough to reopen all your old documents – saved or otherwise – after a restart or if it (hopefully not!) crashes. It’s high-dpi aware, has full unicode support, and actually has multiple levels of undo so you don’t have to think twice before hitting ctrl-z and you don’t have to smash your head against the wall when you realize a few seconds later that you didn’t copy the old contents of the buffer.

This isn’t meant to be a code editor, a text editing “environment,” or a replacement for your Sublime Text/Atom/Visual Studio Code setup. It’s not Microsoft Word and it’s not even WordPerfect. It’s just a text editor that doesn’t suck. It’s compatible with Notepad’s shortcuts so you don’t have to teach yourself everything anew, except with a bit more spice and magic added in (such as supporting multiple windows and restoring all your documents automatically). A single process powers all open windows,1 so things should remain fast and responsive.

While cross-platform code is awesome and wonderful, other platforms like Mac and Linux don’t really need yet another text editor and there’s much to be said for something clean, simple, and native. betterpad isn’t developed in electron and doesn’t ship as an entire operating system in a box just to provide a text editing environment – what you see is what you get.

betterpad is developed in the open on Github and liberally-licensed so you can do what you want with it. 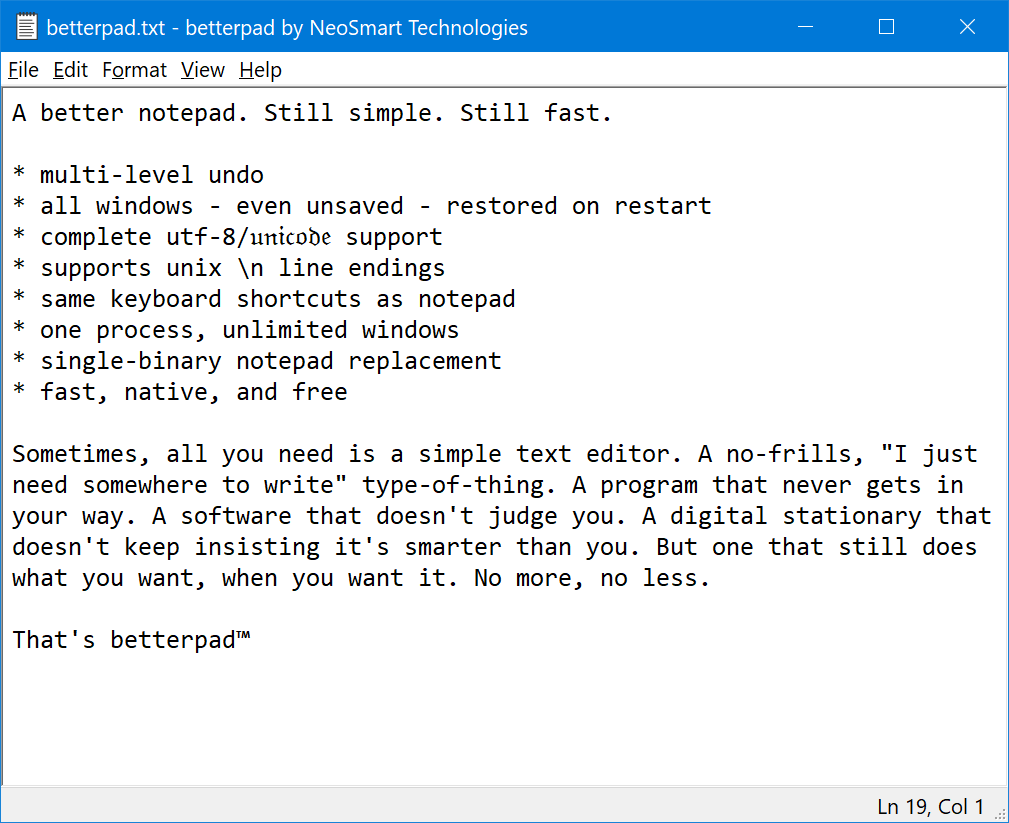 Pro-tip: want to be the first to get updates and find out about awesome, new software? Sign up for email updates from the box to the right, or follow us on facebook or twitter!