So YouTube is gone. Google “snapped it up” as everyone is calling one of Google’s biggest all-stock buy-outs to date. It wouldn’t surprise us if 2006 became known as the “Year of the Mergers” with all of the big corporate buy-outs, merges, and transfers. But as always, yesterday’s today’s news makes people ask “What next?”

If we had to guess, we’d say Digg. All the tell-tale signs of Digg scrambling for the last dollar are there, and just like YouTube, it has a pattern. But in order to talk about Digg, you have to take a look at YouTube first.

YouTube was reaching peak visitor/member stats, with amazing activity and making a name for itself like no other. It had a bunch of “YouTube-wannabe” sites crop up in its aftermath, and kept on changing to keep its users happy. When the lawsuits started coming in, YouTube’s owners started pulling out.

Digg.com has a very similar history going. It might not have lawsuits, but when you look at the statistics for Digg and its readership, it’s sky-rocketing. That’s not bad, of course. It doesn’t in any way indicate a sell-out. But when you couple that with the simple fact that Digg can’t last, you have a problem. 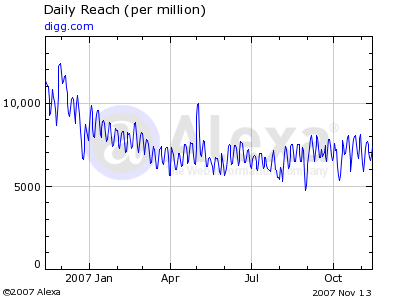 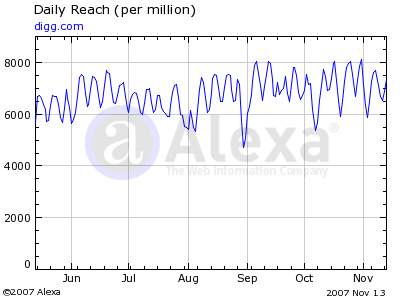 No, we’re not talking about social trends nor are we talking about how boring Digg will get. That’s none of our business. What we are talking about is pure, hard, science. The more users Digg has, the lesser percentage of stories make it to the homepage.

It’s simple: the homepage can only fit so many stories, but people will continue to submit more and more articles. At some point, it’s going to become ridiculously difficult to get to the homepage, and even worse, the existing moderation systems will just fail to keep up with the traffic. Algorithms aren’t very scalable, Digg.com’s least of all.

But now that you mention it, yes, Digg.com as a social innovation and as the “highlight” of many people’s lives will simply stop being that one day. It’s a betting game: the more you wait, the higher the stakes get. The only question is, how long is Kevin Rose planning on waiting? No matter how much he’s making now off the ads, he’ll be making more money selling out. And soon enough, the ads won’t be enough.