This is a post that should probably have been made a little earlier, but we’ve been rather busy cranking out new EasyBCD versions and working on some exciting new developments. We’ve had a lot of questions regarding EasyBCD‘s compatibility with Windows 8, and what our findings are regarding the new Windows “touch-enabled” bootloader screen. In this post, we’ll cover the new bootloader and what works and doesn’t with EasyBCD.

Literally the very first thing you notice when installing and testing Windows 8 Developer Preview is the new boot screen. I personally find it to be very cluttered and unorganized, and generally aesthetically unappealing. However, compared to the decades of text-based boot selection menus that people are accustomed to, reviewers are seeing this as a dramatic improvement.

Some of the interesting things we’ve noticed about the new Windows 8 bootloader: 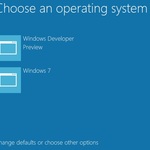 Hopefully the designers at Microsoft can get their hands on the new boot screen before Windows 8 goes RTM. That said, Microsoft has explained the rationale behind the redesign as being purely function over form – the new boot screen is part of the general overhaul of Windows to use the touch-friendly Metro UI. Microsoft is claiming that the new boot menu is intended to be a more touch-friendly interface – and you can’t really disagree with that, as the appallingly-oversized buttons and labels make it very hard to “miss-press” with one’s fingers. However, just how many people will be dual-booting on a PC with a touch-only input device, ummm, remains to be seen.

That out of the way, the new boot menu is more than just a visual overhaul, it’s virtually a complete rewrite of the BOOTMGR/BCD bootloader that was first revealed during the Windows Longhorn/Vista beta program. Some of the changes are a little subtle, but the Windows 8 DP builds have introduced some very tricky concepts, evolving the bootloader from just a selection menu to something rather more complicated.

For reasons we have not yet been able to discover, though we are confident they will be revealed in time, Microsoft has chosen to completely change the manner in which operating systems are loaded once selected from the boot menu. The usual boot process that just about any bootloader goes through is something like this:

With Windows 8, this boot process has been changed completely, and now something more along these lines takes place:

It’s a subtle change as the boot menu is not shown the second time around, but the PC actually reboots after making the selection. We’re not clear on why Microsoft is doing this, but if I’d had to hazard a really wild guess, I’d say it’s to clean up the environment that’s been altered/modified/corrupted by the new boot menu. Basically, it seems that the new boot menu interface has become it’s own mini-OS, and is possibly running in protected mode (vs the traditional real-mode bootloader), and as such, needs to reboot to bring the system back into a real-mode that the Windows 8 kernel can initialize from and bring the system from real to protected mode itself. In short: the new boot menu is more of an OS and less of a boot menu than ever before.

If you were still in any doubt as to just how different the new bootloader was, and how much more of a complete and standalone OS it has turned into, you need look no further than the new repair tools integration. Windows Vista introduced the recovery center, a WinPE-based environment with some tools for both automated and manual repair, on the setup DVD, Windows 7 (in some SKUs and as of certain revisions) copied the recovery center image to the local hard drive and could, if the bootloader itself has not been wiped out, automatically provide an option of loading the recovery center from disk. With Windows 8, Microsoft has gone a step further, integrating the repair tools into the Windows 8 boot menu itself. 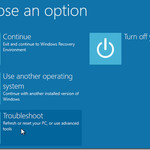 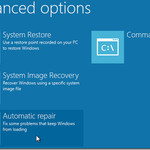 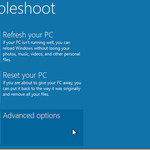 As you can see from the screenshots above, the bootloader no longer contains an entry/link to the repair center WIM image, the bootloader and the repair center have instead been merged together. Still, the same problem with the Windows 7 implementation remains: if the bootloader itself has been wiped (which is the most common problem), the recovery center cannot be accessed. In fact, we see no benefits for this implementation over the Windows 7 method, and can only see the drawbacks of enormously-increased complexity and longer load times.

Now for what you’ve all been asking: how does EasyBCD play with the Windows 8 Developer Preview? The short answer is, EasyBCD supports Windows 8 DP. The long answer is rather more complicated.

It seems that out-of-the-box, the Windows 8 “pretty” (and we use that word very loosely) boot screen supports only Vista and up. It will not show Windows XP, Linux, or other OS entries (in preparation for Secure Boot? Perhaps). EasyBCD can be installed on Windows 8 (though it will attempt to download the .NET Framework if you haven’t manually activated it, because Microsoft has done a 180 and biting the hand of the developers that powers it, has disabled .NET 1.0 – 3.5 compatibility out-of-the-box in Windows 8), and can be used to add, remove, rename, configure, and generally do whatever you want with entries and the Windows 8 boot menu.

The catch is that as soon as you use EasyBCD, Windows 8 will detect something along the lines of unsupported changes to the bootloader and cease to use the new boot menu / boot screen. It will revert to the Windows 7-style boot menu, including the text-based interface and the original boot sequence. Now, while we personally prefer the older menu, we realize that the majority of Windows 8 DP users are rather anxious to both keep the Windows 8 touch-enabled boot screen and retain usage of EasyBCD’s wonderful goodiness, having apparently never heard of the saying “you can’t have your cake and eat it too.” ;-)

Now we’re not sure how/why the Windows 8 boot menu reverts to the Windows 7 menu, because in fact, it is possible to force the Windows 8 boot menu to add unsupported entries if you use only very particular bcdedit commands; but as even something as minor and unimportant as changing the order of boot menu entries in EasyBCD causes Windows to use the old boot menu, it seems we’re missing something. Rest assured, this will all be taken care of in due time, though at the moment it seems rather folly to waste time trying to implement support for what is clearly the alpha stages of the new boot menu and the appropriate course of action would appear to be waiting for the next Windows 8 beta build (rumored to be sometime around February 2012).

EasyBCD, when used from within Windows XP – 7, can be used to add a Windows 8 entry to the bootloader in the same manner that you would a Windows Vista/7 entry. So, in short, EasyBCD supports Windows 8, but Windows 8 does not support EasyBCD :)