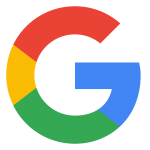 As most people are aware, Google search results are constantly changing and evolving. In the past couple of years, there has been a conscious and very deliberate shift – and not just by Google – to go from showing you what you want to see to showing you what they want you to see. Be it social network integrations (Google+, Facebook connections, twitter feeds, etc), local results, results based off of previous queries (at least this one is in an attempt to show you “relevant” information), and more. This is all old news and has been hashed to death (and to no avail).

But in the past week or so, I’ve personally picked up on a rather annoying and dramatic uptick in incidences of Google’s penchant for – much like a three year old – understanding perfectly-well what it is that you want and pointedly doing anything but that.

I am speaking of course about the dreaded “Missing: important_search_term” that seems to pop up in just about every search result, with an uncanny ability of picking the most relevant keywords and conveniently “forgetting” to include them in your search. Initially, this search feature was reserved for only the most esoteric of search queries that typically turn up only a handful of results (under a few pages total) with all search terms included. In an attempt to be helpful, Google would include additional search results with some keywords removed, so as to remove the burden of extra constraints and widen the search parameters somewhat. Now? It seems like Google’s either come down with a rather bad case of human-robot transmitted alzheimer’s or else we’ve reached an all-new high when it comes to dumbing down the web (newspeak, anyone?).

Out of complete curiosity and having not used it out of a preference for Transmission, I decided to launch Deluge.app, a once-popular torrent client, and see how it fares. Dismayed to find that all these years later, it still doesn’t support “retina” DPIs2 and set out to see if anyone cared or if this software was really as dead-in-the-water as it seemed: 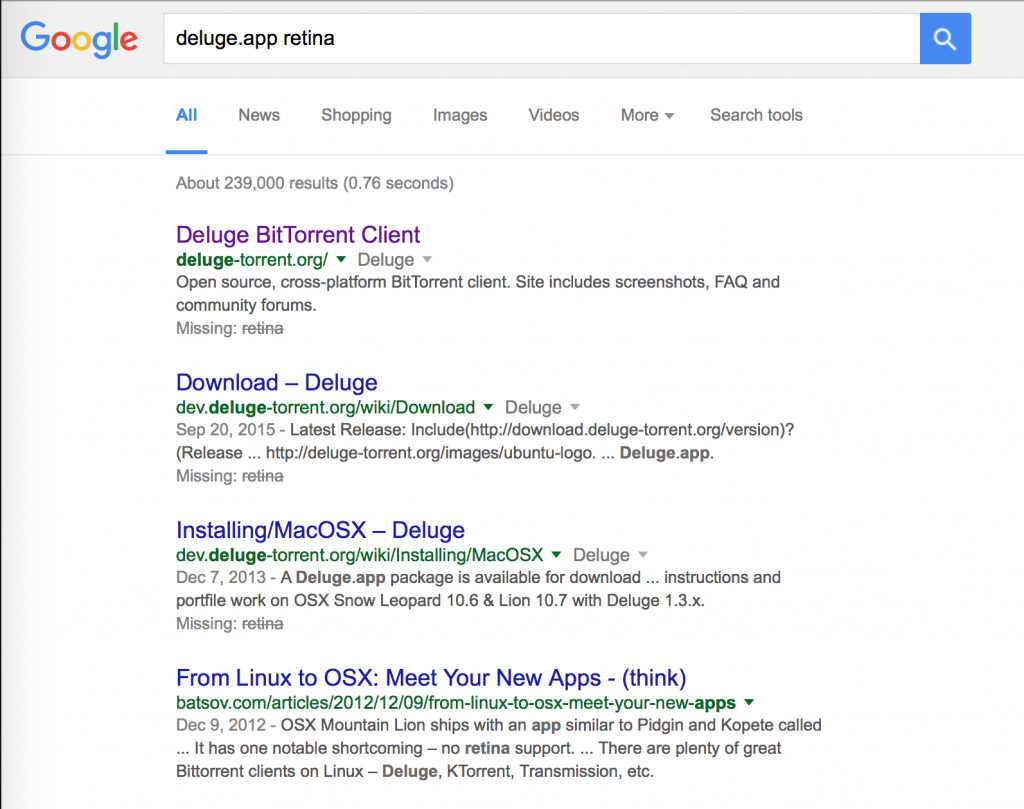 The first three results entirely omitted what is arguably the most-important of my two – only two! – keywords (and that’s only a call I would make if someone were to put a gun to my head and demand that I pick which of these virtually-equally relevant keywords was more important). The first result that Google bothered to actually look up with both keywords is exactly what we are looking for – but it was banished to fourth place thanks to Google’s overly-“intelligent” algorithm!3 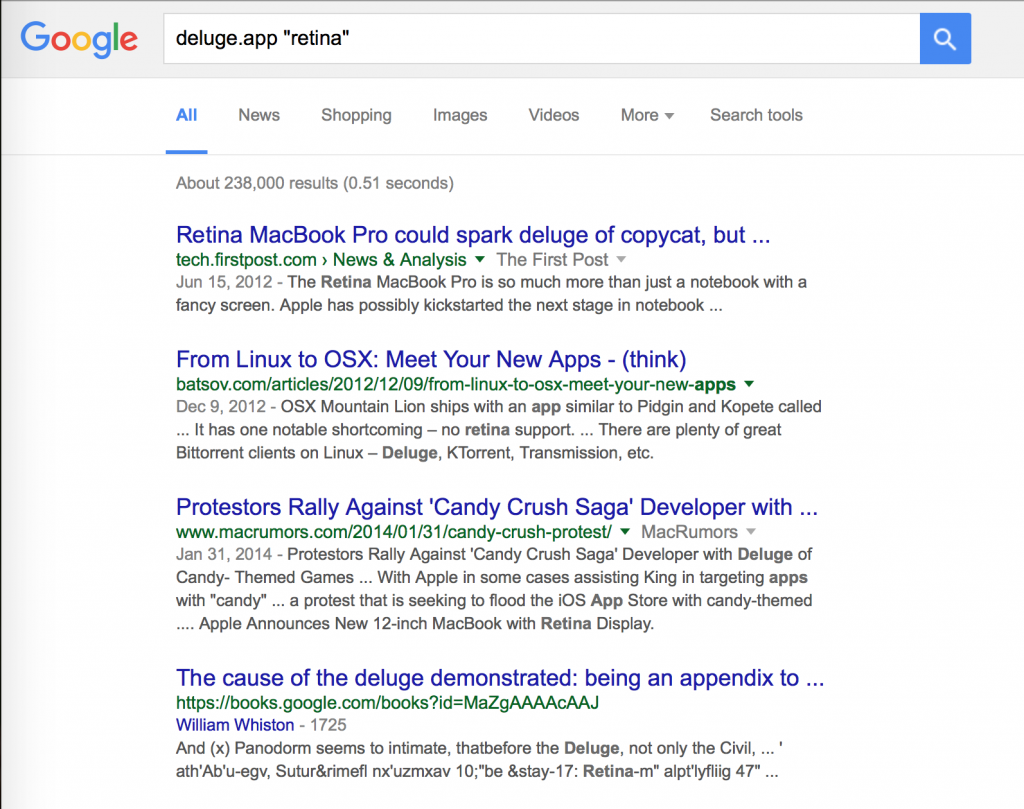 What does Google have to say on the matter?

If you use a long query, Google might ignore some of your keywords. Maybe there aren’t many results that match all your keywords or maybe some of them are redundant.

Yeah. Right. Google did this because there weren’t enough results in a search with both the keywords and it felt bad about coming back empty-handed? Let’s check: 238,000 results with both keywords included – definitely not the case. And an overlap between “deluge” and “retina”? I think not.

Unfortunately, this slippery slope of trying overly-hard to “interpret” what the user was “actually” looking for when 99% of us have already learned how to clarify that for the sake of search is only making Google’s results more-and-more useless.

Before anyone pipes up and comments about Google’s “literal search terms” option – been there, done that. I use Google because it’s smart enough to include words like “help” or “assistance” when you search “aid” or “disk” when you search “drive” or “disc” – without them, we might as well go back to the days before full-text search and when the furthest NLP research had reached was dreams of HAL 9000.

113 thoughts on “On the growing, intentional uselessness of Google search results”