Yesterday, Microsoft made available the first public beta of Windows 8. The developer preview can be downloaded on the Microsoft website, and has received plenty of media coverage and has been the subject of much scrutiny and review. However, in our testing of Windows 8 for compatibility with NeoSmart software and products, we came across a rather, shall we say, interesting approach that Internet Explorer 10 now takes to its crashes. With Windows 8, as with previous versions, when an application hangs or crashes, an error reporting dialog is displayed prompting the user to select an action to take with the crashed program.

What’s different with Windows 8 and Internet Explorer 10 is that Microsoft chooses to deflect the blame from itself, and pin it instead on the unfortunate owners of the website that the user had last visited. In the following screenshot, Internet Explorer 10 has crashed after being unable to handle some of the web scripting on our website. Except instead of the error dialog you would expect (something to the effect of “Internet Explorer has stopped responding,” an error caption which we are all familiar with and of which the web is full), the error dialog instead reads: 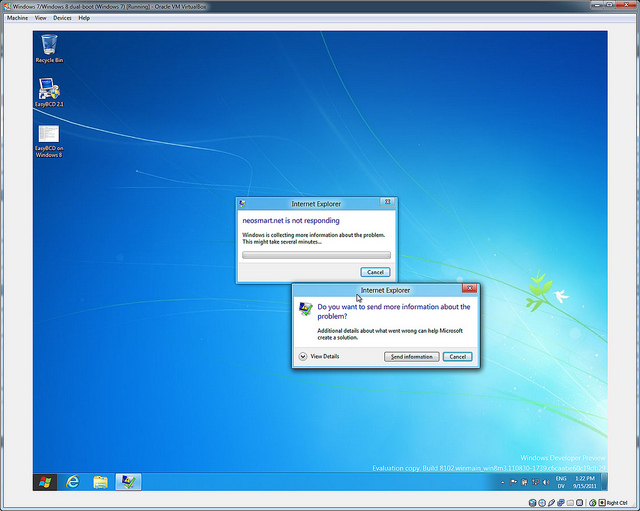 Come again? Really? To us, this seems like a rather mean and dishonest approach to dealing with the shortcomings of the web browser. While it is true that at this moment in time, Internet Explorer is more prone to crashes and hangs than it would be in the final (RTM) release of Windows 8, this does not in any way give Microsoft the right to assume that in the future any hangs or crashes in IE are to be blamed on the designers/coders of the website being visited.

In fact, no code even if purposely meant to crash the browser should succeed in doing so, and certainly should not be held to blame. If Microsoft cannot make a crash-proof browser, that does not mean that they should dishonestly deflect and redirect the blame towards and innocent third party.